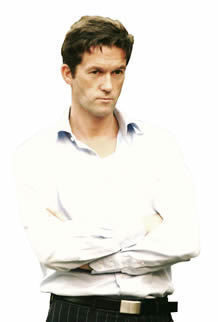 At the May 2008 dinner at which he was honored as the winner of the Graduate School’s 2008 Distinguished Alumnus Award, guests were enthralled as Michael Collins, the world-renowned author of six novels and two collections of short stories, explained how caring, gifted professors at Notre Dame saw the potential in him—then helped him to change his life and rise above the ordinary.

Collins’ many talents extend to film as well. His first screenplay, Julia, was released in 2008, and Oscar-winning director John Madden will direct an adaptation of his novel The Resurrectionists.

Born in Limerick, Ireland, Collins attended Notre Dame as an undergraduate from 1983-1987, when he was a scholar-athlete in cross country and track. After earning his master’s degree in creative writing from Notre Dame in 1991, he went on to earn a doctorate in that same field from the University of Illinois.

A world-class “extreme” athlete as well as one of his generation’s finest writers, Collins has won the Sahara Marathon, The North Pole Marathon, the Mount Everest Marathon, The Himalayan 100 Mile Challenge, and the Antarctic Marathon, among other races. He represented his native Ireland at the 2007 World 100 K Championships, where, at age 43, he set a national record. Through sponsors, Collins’ athletic endeavors support humanitarian and literacy programs for underprivileged children throughout the world.