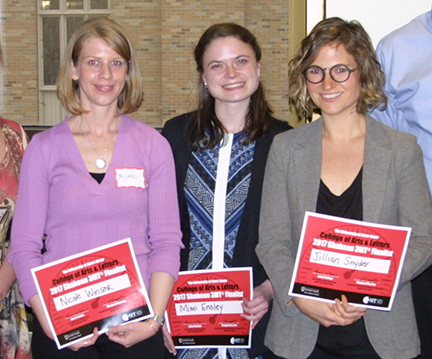 English spoke the loudest at the College of Arts and Letters Three Minute Thesis qualifying round on Tuesday night. English Ph.D. candidates Nicole Winsor, Mimi Ensley, and Jillian Snyder will advance to compete against the finalists from the College of Science and College of Engineering on March 27 in the Jordan Auditorium, Mendoza College of Business. In addition to the 13 competitors, a strong showing of over 50 or so audience members watched the exciting competition.

Graduate students presented on a variety of stimulating and compelling research topics. Courtney Smotherman (LIT) presented her theory on the historiography of the Italian Wars and it’s retention of the humanist character which she believes derived from the authors’ more personalized influence from and experience of the wars. Felicia Moralez (History) detailed the historical relationship between ethnic Mexican immigrants and the Gary, Indiana YWCA leading to it’s rebranding as a social agency for recent immigrants. Paul Blaschko (Philosophy) quite humorously introduced that a person may have more agency over their own beliefs than philosophers have long thought, while Caroline Hornburg (Psychology) recounted her research into the structure and teaching of right blank format problems versus left blank problems and it’s affects on a child’s understanding of math equivalence. 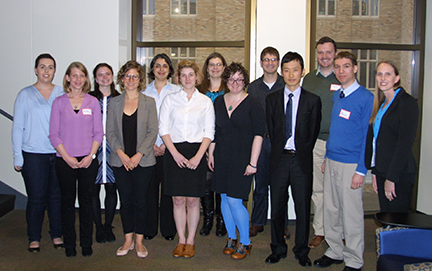 The full field of Arts & Letters competitors for 2017

Mae Kilker (Medieval Institute) gave a powerful evocation of modern negative attitudes towards swamps and wetlands in spite of the essential ecological role they now play and how swamps hold the solutions to many modern ecological problems. Marjorie Housley (English) recounted her research into constructions and representations of eroticism and emotion in Anglo-Saxon, Celtic, and Norse heroic literature and how they help us to re-imagine the modern world. Jeehoon Han (Economics) studied the interactions of health and nutritional assistance programs and the likelihood that participants would also partake in other programs.

Stephen Mattingly (Psychology) presented his research about how our mind’s seeming inability to remember things in times of stress, may not necessarily be bad, but instead may be a survival mechanism designed to allow us to focus solely on survival relevant information such as calling 911. Katherine Osborn (English) considered the ways in which female British authors and philosophers engaged with and revised prevailing theories of the passions, and the rhetorical approaches they used to discuss how those theories constrained or legitimized women’s participation in the public sphere

Finally, in a voice made for radio, our final presenter Nevin Climenhaga (Philosophy) proposed a method for determining how probable one proposition is, given another – for example, how probable it is that the butler did it, given that his fingerprints are on the gun. His process involved breaking down probabilities into two distinct categories (basic and non-basic) and then assigning each a value.

Sarah Baechle, Assistant Program Director for Professional Development said, “I think the really impressive part of the event was the way the competitors were able to cogently convey both the breadth of the kind of research that they’re doing in Arts and Letters programs, while demonstrating the real world significance of work in fields that many outside of their fields might perceive as more esoteric. And now, it’s on to the Engineering qualifying round on Thursday, March 2 from 4-6 p.m. in DeBartolo Hall room 140.”