Lauren Rich, a Ph.D. candidate in Notre Dame’s Department of English, has been awarded a 2011–12 American Dissertation Fellowship from the American Association of University Women for her research on food in early 20th century British and colonial fiction. Fewer than 10 percent of the more than 900 applicants were given fellowships. 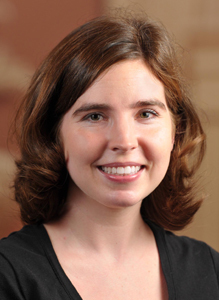 Rich says she was particularly honored because the award “is designed not only to recognize intellectually rigorous and promising scholarly projects but also to support women who are contributing to their academic and local communities by mentoring and helping other women.”

Rich’s dissertation, “Food for Thought: Eating, Reading, and Being Modern in Twentieth-Century British and Irish Literature, 1904–1954,” seeks to examine and enrich the understanding of the complex relationships between food, community, and literature.

“I’m amazed at just how wrong she was. Food is everywhere in early 20th century literature—it’s just that literary critics and scholars are only now starting to really pay attention to it.”

This scholarly interest comes at a time when food is also becoming a hot topic of cultural conversation, Rich says, pointing to the growing awareness of obesity, environmental issues related to agribusiness, and the locavore and slow food movements.

In her dissertation, co-directed by Associate Professor of English Barbara Green and Maud Ellmann (now at the University of Chicago), Rich takes an interdisciplinary approach, incorporating material from fields such as history, anthropology, and sociology.

“I also get to read a lot of old cookbooks,” she says, “which can be very interesting. It wasn’t until I started looking at period recipes for Bouef-en-Daube, a dish featured in a key scene in Virginia Woolf’s novel To the Lighthouse, that I realized it was meant to be anachronistic—a signifier for a way of life that is rapidly passing away in the novel.”

In conjunction with her research, Rich has also developed and taught a literature course for non-English majors called Voracious Reading: Four Centuries of Food and Fiction.

“While the course explored a much wider variety of literary and non-literary texts than my dissertation,” she says, “it, too, centered around food-studies readings. I find students—especially non-majors—are really attracted by this approach.”

Students who wouldn’t normally take an English class did so because they like to cook or like watching food-related television programs, Rich says. But by the end of the semester, these same students found they’d become more careful readers and were eager to explore additional authors and genres.

At the request of her students, Rich even led an informal reading group the semester after her course ended. Called Food for Thought, the group continued the kinds of conversations she began in the classroom with students.

“Among many other things,” she says, “we read Irish novelist Pat McCabe’s The Butcher Boy together, scheduled a screening of the film adaptation, and invited the author to join one of our meetings while he was visiting at Notre Dame. He very graciously answered our questions, talked about his writing process, and even autographed our books.”

In another project related to her dissertation, Rich is helping to organize a January 2012 conference at Notre Dame called Food Networks: Gender and Foodways.

Sponsored by the College of Arts and Letters’ Gender Studies Program, the interdisciplinary event will focus on gender issues within the context of food and food culture, including food spaces, representations of food, dieting, and individuals associated with the food industry, among others.

“I’m really fortunate in that my scholarly work allows me to combine two of my greatest passions: food and literature,” she says. “Eating and reading—both forms of consumption—can be some of life’s greatest pleasures, though both have become problematic for many people for various reasons.

“I see my work as a scholar and teacher as, among other things, a way of helping people recover a sense of pleasure and enjoyment in these activities.”

Originally published by Joanna Basile at al.nd.edu on October 12, 2011.