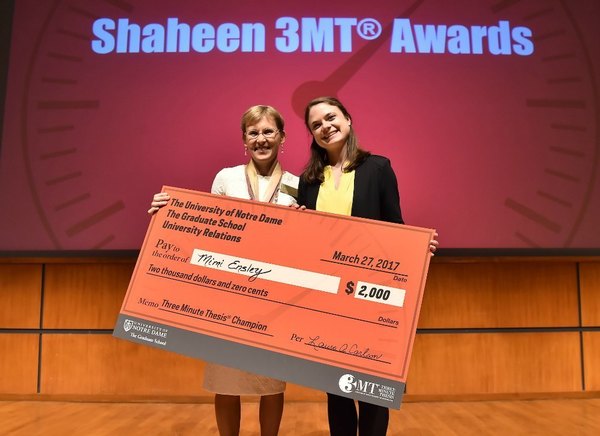 The Shaheen 3MT® is a communication competition where graduate students from the colleges of Engineering, Science and Arts & Letters try to effectively explain their research in a language appropriate to an audience of specialists and non-specialists alike, in three minutes or less. Competitors addressed a panel of judges in front of a live audience using one static slide as part of their presentation.

Ensley, whose faculty adviser is Professor Tim Machan, was the fifth of the nine competitors to present, said, “Winning 3MT® was exhilarating. I was excited and honored to be in the final round with so many hugely talented Notre Dame graduate students and winning came as an enormous surprise to me.” Initially nervous about her speech, Ensley drew strength from the support of an audience that contained many of her colleagues from the English Department and elsewhere.

A successful 3MT® presentation may contain some of the same elements as a stirring dramatic monologue with equal parts emotional and intellectual intensity. As in its theatrical counterpart, a 3MT® presentation can set a scene, reveal passions, and command the attention of an audience with conviction and poise. 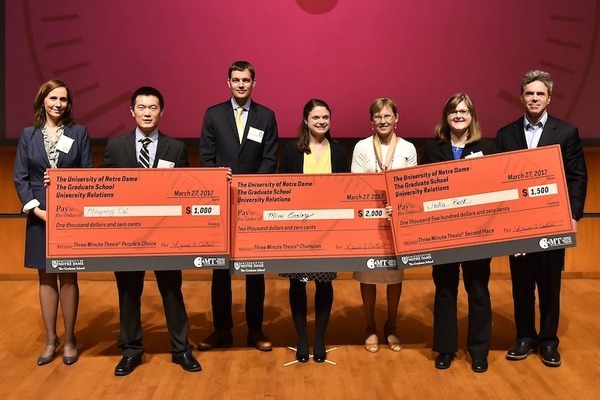 Ensley bested the other eight finalists for a top prize of $2000. A second place prize of $1500 went to Julia Beck (Chemistry and Biochemistry) and $1000 to the People’s Choice winner, Mingming Cai (Electrical Engineering).

Ensley’s presentation, titled “Transmedia Traditions: Re-Making Medieval Romance,” told the story of a book. Not the story in a book, but the story of a particular book. More precisely, the 16th century romance, Richard Coer de Lyon. Ensley’s dissertation asks why a frivolous story of questing knights and marvelous dragons, previously viewed as aesthetically unpleasing with little value beyond surface level entertainment would last well into the 18th century and beyond?

Ensley is interested in exploring how the medieval romance and its persistence in popular print helped to frame an idea of the middle ages for readers living in a rapidly changing post medieval world. 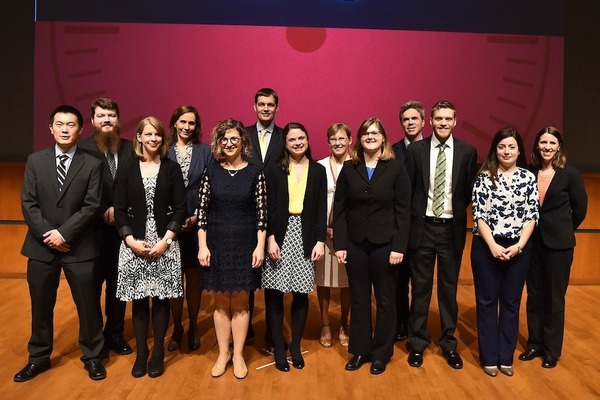 Ensley says, “By looking at the material evidence of the people who both produced and read Middle English romances in the century after printing came to England in 1476, my research gives us a new way to think about how post-medieval cultures understood, and even constructed, the period we now call the Middle Ages. More broadly, by better understanding the experiences of past readers, we can, in turn, better understand how narratives, like those in my research, frame our own responses to the past."

Ensley will move on to represent Notre Dame at the Midwest Association of Graduate Schools (MAGS) competition in Indianapolis on April 7. As the evening came to a close with a lively reception immediately following the competition, Ensley said, “In the end, I was excited to have the opportunity to share my research with a large audience. And I’m now looking forward to having the same opportunity on a regional stage at MAGS.”