With the critical November elections now upon us, the work of political theorist James Fetter, Ph.D., couldn’t be more timely.

Fetter, who earned his Ph.D. from Notre Dame in Political Science in 2012, studies and writes about the virtues of political leadership. Now a postdoctoral fellow at Notre Dame in the Tocqueville Program For Inquiry in Religion and American Public Life, he is interested in ancient, medieval, and early modern models of statesmanship and political leadership as well as the contemporary relevance of these models. 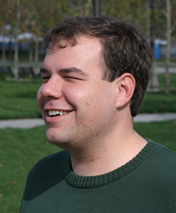 Fetter’s path to his research interest, and to Notre Dame’s highly regarded program in political theory, began in his Virginia high school, where his Latin teacher sparked an interest in both the classics and in politics more broadly. As a Woodruff Scholar at Emory University, Fetter took a few political theory classes and proclaimed himself “hooked.”

“My study of classical texts has never been merely archival,” Fetter says. "I strongly believe that study of the classics enlightens our understanding of politics through the ages—including an understanding of the current political landscape. That’s why political theory is the perfect field for me.”

As a graduate student at Notre Dame, Fetter was a Presidential Fellow and, in addition to his own coursework and research, served first as a teaching assistant in several courses and then as co-director of a Program of Liberal Studies core seminar and its Political and Constitutional Theory tutorial. He also conducted research on normative theories of international relations and presented at six conferences.

Fetter’s dissertation, written under the direction of Prof. Walter Nicgorski investigates the historical development of the concept of magnanimity in the thought of several influential philosophers in the history of Western political thought—from Aristotle to Machiavelli. It places special emphasis on the influence of ancient conceptions of magnanimity on those of medieval and early modern thinkers as well as the relationship between magnanimity and political leadership.

“A magnanimous leader,” Fetter explains, “possesses outstanding political courage and the long view of the common good. Moreover, the magnanimous leader is—and knows that he or she is—particularly well-suited to providing both virtuous and effective leadership to the state. This self-awareness motivates the seeking of high political office, even when doing so might pose great personal risks.”

He cites George Washington and Abraham Lincoln as leaders of this highest rank, and considers Winston Churchill and Nelson Mandela as two leaders in the modern era who, arguably, embody these virtues.

Fetter’s postdoctoral award is proving to be a great boon to his scholarship.

“It is truly wonderful after the sometimes frenetic pace of my undergraduate and graduate student years to have the luxury of time—the time to reflect and think through what I have already done,” he explains. “My focus now is examining what I can take from the massive job of my dissertation and bring it forward to something useful—namely, a book and several articles.”

In this endeavor, Fetter is guided by noted political theorist and founder of the Tocqueville Program, Prof. Michael Zuckert, the Nancy R. Dreux Professor of Political Science.

“James has a very important project for his post-doc year,” comments Zuckert, “as he attempts to revive an old but still-timely notion of statesmanship as rooted in the moral virtue of magnanimity or ‘great-souledness.’”

While expanding on his graduate work, Fetter also relishes the time his postdoctoral fellowship affords to explore new academic interests.

His own experiences with being blind since birth have sparked one such interest—a branching out into disability studies.

“Currently, I am working on a paper examining the intersection of disability and political theory,” he says. “I’m looking at ways in which virtue ethics, and especially the virtues associated with great leadership in ancient and medieval texts—including magnanimity—can be brought to bear on removing the barriers that so often prevent otherwise qualified and excellent people with disabilities from seeking and attaining leadership positions with major responsibilities and public exposure.”

As rewarding as post-doc position is proving to be, Fetter is very much focused on his next step: securing a faculty position that will allow him to teach, continue with his research and writing, and help students develop their own research agendas.