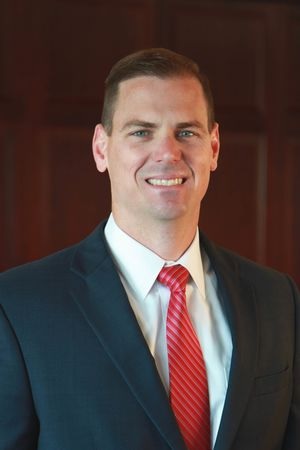 Named for a former Notre Dame athletic director and professor of military studies, the award is given annually to a distinguished member of the Michiana community by the Michiana Chapter of the Military Officers Association of America (MOAA).

Jones, whose role at Notre Dame entails enhancing the campus experience for military-connected students and their families, is a combat veteran with an inspiring story.

While a senior at the State University of New York (SUNY) at Albany and starting center on the football team, Jones joined the United States Marine Corps (USMC) after watching coverage of the September 11 terrorist attacks on the news. He served two combat deployments in Iraq, leading operations during the most dangerous period of the war and suffering a gunshot wound, brain injury, and post-traumatic stress disorder (PTSD) for his efforts.

Jones’ other service to the military, which has taken him to Japan, Thailand, and the Philippines, has included supporting training and education disciplines, such as helping develop and deploy tactical and technical curricula.

Jones has received numerous awards for his military service including the Purple Heart Medal, the Military Outstanding Volunteer Service Medal, the General John A. Lejeune Award for inspirational leadership, and Navy and Marine Corps Commendation Medal.

Given Jones’ background, he is well-suited to support the veterans, active duty service members, and members of the Reserves, National Guard, and ROTC who call Notre Dame home. His work for the Office of Military and Veterans Affairs, which is celebrating its first full year on campus, allows him to work closely with faculty and staff to direct strategies for creating an optimal environment for military-connected students and their families.

In his spare time, Jones serves the community in a variety of capacities. He has been a Cub Scout den leader and youth baseball coach and is currently a board member of the Michiana YMCA. He also serves on a leadership committee for the South Bend Marines, an organization dedicated to providing relationships, community, and support for USMC veterans from World War II through Iraq and Afghanistan.

“I look at the list of the recipients and it includes Father Theodore Hesburgh, Coach Holtz, Coach Muffet McGraw. I don't feel like I’m worthy and maybe have the same level of accomplishments, but I’m certainly just as grateful if not more grateful to receive it," Jones said.

Attending the awards ceremony with Jones included his wife, Mary, and Laura Carlson, vice president, associate provost, and dean of the Graduate School.

“As we work towards building a welcoming community for military-connected students, Regan is a role model of enthusiasm and integrity,” Carlson said. “He approaches his work on campus with the same qualities that made him successful in the Marines: dedication, organization, and team spirit. I am proud to have Regan on our team.”