Shortly before defending his dissertation in September 2009, Robert Brenneman was offered a most unusual prize for a student: a book contract with the Oxford University Press. The prize was well deserved. Not only was Brenneman a top student in Notre Dame’s sociology department, he is a master storyteller—and the account he submitted to the press of his work the past three years with members and ex-members of some of Central America’s most violent gangs is both passionate and gripping. 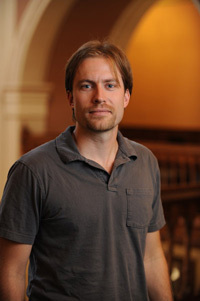 Brenneman’s book will build on his dissertation, which he describes as “a sociological exploration of the transformation that many gang youth take from gang ‘homie’ to evangelical hermano. What makes a gang homie trade in his gun for a Bible? And, what does this teach us more broadly about religious conversion, identity transformation, and the state of religion in Latin America?”

Brenneman grew up just northeast of Notre Dame in the small town of Dowagiac, Michigan. A Mennonite, he attended Eastern Mennonite University in Virginia. He experienced a transformation of his own when he spent his sophomore year in Central America. He recalls that “in a region marked by crippling foreign debt and political violence, we studied issues of poverty and war in the nascent democracies of the region. I began to read the works of [long-time Notre Dame faculty member] John Howard Yoder as well as Catholic liberation theologians. I wanted to know what faith can contribute in a context of violence.”

After graduation, Brenneman returned to Guatemala—this time as the assistant director—eventually the director—of the Mennonites’ Central American Study and Service Program. Working to effect the transformation in others that he had experienced himself a few years earlier, Brenneman led cross-cultural seminars dealing with violence, poverty, and culture in Guatemala. There wasviolence aplenty. “During these years, the central issues and key concerns facing Central Americans of the ‘Northern Triangle’ of Guatemala, Honduras, and El Salvador began to shift perceptibly from land reform and poverty toward fighting political corruption and addressing rampant crime.”

All this time, while never having taken a sociology course as an undergraduate, Brenneman began to develop a passionate interest in the role of religion in a violent society. He decided that returning to school to earn his Ph.D. in sociology would provide a means of searching for answers to his many questions. Offered a choice between two universities, he chose Notre Dame—“for Notre Dame takes religion seriously—not uncritically—but seriously.” Very importantly as well, the financial support offered was superior at Notre Dame.

Entering graduate school in the fall of 2003, Brenneman recalls, “It took me some time to find my bearings. I struggled a bit to make peace with a sociological approach.” After finishing his master’s thesis on religion and immigration attitudes in the U.S. and contemplating a dissertation topic, Brenneman kept returning to the topic of gangs in Central America. “There’s so much research on why young people join gangs but very little on how they leave them. . . I didn’t know what I would find. A former colleague had started a group for ex-gang members. I contacted him, asked for introductions, returned to Central America, and began interviewing ex-gang members.”

The result was a dissertation that renowned Notre Dame sociologist Prof. Christian Smith, the William R. Kenan Professor of Sociology and Director of the Center for the Study of Religion and Society, calls “a really terrific piece of scholarship. Bob’s on-the-ground fieldwork combined with a hugely important topic and his own scholarly insights made this a dissertation deserving an Oxford book contract. It makes a real contribution to many areas of study. Bob is one of the jewels in our department.”

Brenneman received his Ph.D. in January 2010. As he interviews for positions in academia and works on his book, Homies and Hermanos: God and Gangs in Central America, he is serving as a postdoctoral fellow at the Center for the Study of Religion and Society, which administers nearly $7 million in external grants to study such topics as religious faith and practice of American youth, American religion and ethnicity, and the science of generosity in human life and society.

It is a good bridge position for this aspiring professor. “Notre Dame has offered me an ideal academic atmosphere to prepare for a career in teaching and to understand the complex relationship between religion and society. In the future I hope to extend my research on the impact of religion on masculinity in the marginalized neighborhoods of Central America.”

Bob is now an assistant professor of sociology at St. Michael’s College, Vermont.