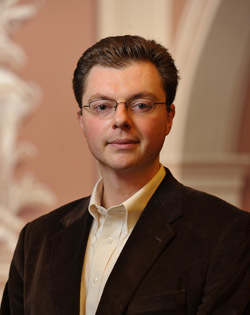 Joseph Teller, now completing his studies in Renaissance (1595-1650) devotional poetry in Notre Dame’s highly regarded graduate program in English, vividly recalls the moment he decided to pursue a career in literature. He had just finished reading Hemingway’s A Farewell to Arms in his California high school and was seized with the thought, “How could a book make me feel like this?” He further recalls: “I had always wanted to teach, to share the beauty of words and stories with others. That’s why I study literature: because I believe that we are made up of the stories we tell.”

The story of Teller’s own path to Notre Dame is one that illustrates the meaning of the phrase “the Notre Dame family”:

“As I was finishing my master’s degree at California State University Fresno, my wife, Marianna, and I explored together what doctoral programs might be good matches for me. At the time, we were six months pregnant with our first son. I applied to Notre Dame—and eight other very prestigious programs.

“In February 2005, on the very day I began receiving acceptances from the doctoral programs, our lives changed forever. My wife and son both almost died in labor, because of a major aneurism rupture in Marianna’s spleen. Statistically, they shouldn’t have lived at all. Indeed, the doctors called code blue on both of them. Our son, Joseph Andrew Teller, was born almost dead. He spent the first weeks of his life in neonatal intensive care. Marianna had a long recovery after the traumatic emergency caesarian. When we brought Andrew home—on a temporary feeding tube— Marianna and I did not know what to expect; we only knew, as the weeks passed, something was terribly wrong with Andrew. He couldn’t eat well, and he reached no milestones. He could only cry and cry on the floor or in our arms, confused and disconnected from the world. Many months later, here in Indiana, we would learn he had severe cerebral palsy.

“It was during this time, though—from Andrew’s birth and through his first hard year—that Notre Dame became for us our extended family. Immediately following Andrew’s birth, when we were struggling to decide what university to attend and where to move, I received a call from Sandra Gustafson, the director of graduate studies of the English department at the time, congratulating me on my acceptance. What I remember was how genuinely concerned she was not only for me, but for Marianna and Andrew—people she had never met. I was touched by her empathy, her understanding of me as a whole person, and not merely as a curriculum vitae. She offered me a very generous scholarship—the Gaia—one capable of making my doctorate a reality despite the extraordinary circumstances my family was finding itself in.

“A week after speaking with Sandra, I had narrowed my choices down to one other school and Notre Dame. I visited both and will always remember the stark and palpable difference. Faculty and students at the other institution were interested in my intellectual work only. But here at Notre Dame, I found something different, something special—even, I think, sacred. The faculty and students I met were genuinely warm and caring. They asked personal questions, expressed true interest in me not only as a professional, but as a young father and husband. By the end of the first night, I called my wife, telling her, ‘I think this might be the place.’ By the end of my second day on campus, I called her again: ‘Marianna, I don’t know how to explain this, but I’m supposed to be here; we’re supposed to be here.’

“That sense of family and community we felt from Notre Dame continued from the moment we moved here. The people of Notre Dame have supported me as a whole person, with an intellect and a soul, someone who is a father and husband and also a scholar.

“Thankfully and miraculously, Andrew is now thriving, growing, and slowly, but persistently, developing. In April of 2007, he became a very proud big brother to Michael Francis, our second son. And, later this spring, he will become a big brother yet again.

“As I continue in my scholarly work, I am grateful to have the opportunity to fulfill my dream of sharing the beauty of words and writing with others who seek both understanding and faith. I sincerely believe in the difference the Notre Dame family can make, what a blessing the love and generosity of its members has been to me, my family, and to many other young men and women yearning for a place that both challenges their intellects and embraces them as whole persons, that touches them as beings of both mind and spirit. For it has been the love and nurturing generosity of this university family—named for the Mother of all the Living—that has so blessed my own. And it is, I believe, from the love of our dedicated families both large and small that our best and most hopeful stories are made and told.”