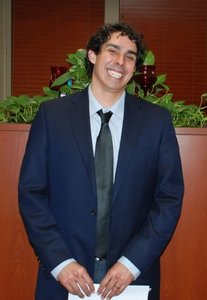 — Soldiers using their smartphones to track the eyes, facial features, voice, and fingerprints of suspected combatants;

— Iris images as the foundation of a national ID program in India for its 1.3 billion people, as well as a replacement for PINs in several banks throughout the Middle East;

— School systems using iris scans to trigger cell phone messages to parents of the precise coordinates and time that their children exit a school bus.

While these scenarios may seem like science fiction to some, they are actual feats of identification in our world today. All are possible thanks to advances in the field of biometrics — the field in which Notre Dame Computer Science and Engineering doctoral student Estefan Ortiz spends his days — and, frequently, his nights.

Estefan is advised by Prof. Kevin Bowyer, the Schubmehl-Prein Professor and chair of the Department of Computer Science and Engineering, and a leading authority in biometrics and pattern recognition. Together, Prof. Bowyer and co-Director Prof. Patrick J. Flynn lead the Computer Vision Research Laboratory (CVRL), where they guide students and direct research areas that focus on computer vision and pattern recognition. Recent research projects of the CVRL group have been in the areas of biometrics, aerial image analysis, and 3-D scene analysis.

Born in Victoria, Texas, Estefan describes himself as a kid who “always wanted to take things apart and put them together.” Early on, he became fascinated with computers — an interest that was nurtured by his parents, who allowed him to experiment with their then cutting-edge Tandy computer and enrolled him in summer computer camps.

“I saw early on how computers could flesh out the ideas I had,” he recalls.

As an undergraduate at Saint Mary’s University in San Antonio, Estefan first became interested in graduate school and advanced research when he completed a Research Experiences for Undergraduates (REU) in Puerto Rico in the summer of 2001. After earning bachelors’ degrees in both electrical engineering and mathematics, he went directly to the University of Hawaii at Manoa for a master’s degree in electrical engineering. There, he focused on problems related to aircraft health management and fault diagnosis. For example, he used onboard aircraft measurements along with signal processing and pattern recognition techniques to estimate the health of an aircraft’s engine.

Now, with Prof. Bowyer, Estefan is focused on how to mitigate the effects that pupil dilation has on iris biometrics systems.

“Iris biometrics essentially uses an image of a person’s iris as a means of identification,” he explains. “The texture of the iris provides a rich set of identifiable patterns that are used for accurate identification. However, problems arise when the texture of the iris itself changes — as occurs when the pupil dilates. And, because the iris is a three-dimensional surface, the image that is taken for representation will not necessarily contain the same identifiable patterns.”

There are several factors that cause the pupil to dilate. One is aging.

“As we age,” Estefan says, “our pupils naturally become smaller — it’s simply part of aging process. So, if you enrolled a person at age 15 in an iris biometric system, there is a natural drift in pupil dilation size that would affect accuracy in later years.”

Early on as a graduate student, Estefan won second place in the National Security Innovation Competition for his work on iris biometrics. More recently, Prof. Bowyer and Estefan are co-authors of a paper released in 2014 that points to errors in a recent National Institute of Standards and Technology (NIST) report on how iris aging affects the accuracy of iris recognition. In addition to describing specific methodological errors in the NIST report, Prof. Bowyer and Estefan presented a list of suggestions to be addressed in a revised version of the NIST report. [See: http://news.nd.edu/news/45486-notre-dame-researchers-point-to-errors-in-nist-report-on-iris-aging/]

As he completes his dissertation, Estefan is in the final stages of his career as a doctoral student.

And, as he reflects on his doctoral education here at Notre Dame, Estefan says that it has been “a truly exciting and wonderful academic and personal experience” — so much so that he has been pleased to be tapped as recruiter for the Graduate School.

“When I speak with students at fairs and one-on-one,” he says, “I emphasize that when you are accepted to Notre Dame and begin here, the University wants you to do well and to complete your degree. Notre Dame really is a family, and there are many people and resources dedicated to making sure that you grow throughout your time here both academically and personally.”

Edit: The photo above was taken after Estefan’s candidacy exam, not his defense. – Ed.
_