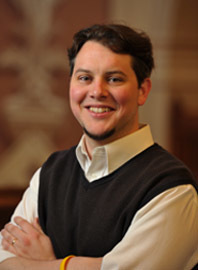 We often think of the impact that faculty have on the research agenda of a university and seldom of that of graduate students; however, graduate students do have an impact. Joshua Cameron, Ph.D. Aerospace and Mechanical Engineering 2007, is a perfect example.

As a graduate student, Cameron did something that had not been done before: Under the direction of Prof. Scott Morris, he designed and built a transonic axial compressor—the kind found in jet engines—in a university setting. The world has taken notice: Notre Dame’s Transonic Axial Compressor facility (ND-TAC) has drawn visits from researchers around the world and from major engine manufacturers such as Pratt and Whitney, Honeywell, Rolls-Royce, and General Electric. The U.S. Air Force has also taken notice and has funded turbomachinery-related research at Notre Dame for the past seven years.

Cameron’s path to Notre Dame was somewhat serendipitous. Growing up all over the country—his father was an Army surgeon—he recalls always loving science, math, and aircraft. “I saw a lot of helicopters living on Army bases!” With stellar SATs, Cameron received a full scholarship to attend the Illinois Institute of Technology (IIT), at which current Notre Dame Aerospace Engineering Prof. Thomas Corke then taught. He was invited to stay on for graduate school. During that time, Cameron built an axial compressor that operated at low speeds, as is typical for university research. “The point,” he says, “is that I built a compressor. It’s unusual for a graduate student to build one from the ground up.”

After earning his master’s degree from IIT, Cameron came to Notre Dame at the invitation of Prof. Scott Morris, recently recruited to the Notre Dame faculty. The two had met at a conference several years before, and Morris was intrigued by Cameron’s work. Says Morris: “I asked Josh to join me at Notre Dame with the task of designing and constructing the facilities we needed for a research program in the field of gas-turbine engines. After three years and approximately $0.5 million in expenditures, the ND-TAC facility was fully operational. It became clear immediately that this facility would be recognized around the world as the best of its kind. Its capabilities are extraordinary. For example, the entire drive system of the compressor is levitated magnetically. Josh was able to successfully design the magnetic levitation system into the facility design so that the exact position of the rotating components could be known and manipulated. This has allowed the compressor systems to be understood with unprecedented fidelity. New research into the control of these dynamics for improved aircraft propulsion systems is now in progress. With the ND-TAC facility, we are working to develop new compressor designs that will allow future aircraft engines to be significantly safer with better fuel efficiency.”

Cameron elaborates: “The problem we are trying to solve is how to produce more efficient engines without adding to their weight. One of our current projects focuses on stall and surge. That is, if you push jet engines hard enough, the flow through the engine reverses and flames come shooting out. This is due to compressor problems and can destroy engines. For over 30 years, researchers have been trying to prevent surge; but to do that research most effectively, one needs a high-speed compressor—the type that is generally built at great expense in industry labs. Now, with the ND-TAC, we are able to perform this research at engine-relevant conditions.”

After receiving his Ph.D., and winning Shaheen Award honors in Engineering, Cameron took a position with Notre Dame as a visiting assistant professor to continue his work, then left for a short time to consult with a start-up company. Prof. Morris persuaded him to return to the laboratory in 2010 as a research professor in order to continue his teaching and research in turbomachinery.

Cameron is happy to be back on campus—directing graduate students, continuing his work at ND-TAC, and expanding the turbomachinery laboratory’s capabilities. The Notre Dame Turbomachinery Laboratory is now equipped with a high-speed turbine rig in addition to the compressor facility. This facility was design and built by Dr. John Schmitz (Ph.D. 2010) under the guidance of Profs. Cameron and Morris. The compressor and turbine facilities combined provide a highly unique laboratory that is now working with government and industry on the technologies that will power the next generation of aircraft.

The future of the Turbomachinery Laboratory appears to be very promising. Three new high-speed facilities are currently in the design and construction phase, including a new compressor that will operate at nearly 27000 rpm, and two new turbine facilities. This expansion will further solidify Notre Dame’s position as the world leader in turbomachinery research.