Political science graduate student and former Kellogg Dissertation Year Fellow Olukunle Owolabi has a unique personal connection with the subject of his research — the differences in development and governance between countries with a history of plantation slavery and those with a history of colonial occupation. 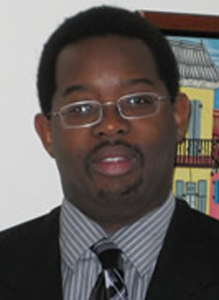 The son of a Trinidadian mother and a Nigerian father, Owolabi was born in Toronto, Canada but moved to Nigeria when he was four so that his father, an obstetrician/gynecologist, could realize his dream of
constructing a hospital there.

“One summer,” he recalls, "my family traveled to Trinidad to visit my mother’s relatives—a visit stretched longer by a military coup in Nigeria.

“Even at the age of seven, I was struck by the differences in socioeconomic development, inequality, and governance between my parents’ homelands. This seemed particularly striking, given that both countries were former British colonies with oil-exporting economies and ethnically diverse populations.”

After earning degrees at the University of Toronto (BA, International Relations) and Oxford University (M.Phil, Latin American Studies), Owolabi took a year off to nurture a second passion: music. A gifted musician—he has composed several award-winning choral pieces, earned diplomas in piano and organ performance from the Royal Conservatory of Music in Toronto, and performed as an organist while
earning his degree at Oxford — Owolabi served in that year as director of music at St. Basil’s Church in Toronto.

Then, ready to immerse himself once again in academia, he entered Notre Dame’s doctoral program in political science. Still intrigued by the differences in development and present-day government between countries subjected to different modes of European colonization, he is now completing his dissertation on that very topic.

“Kunle’s deep reading and extensive archival work on three continents have made him deeply and extensively knowledgeable about colonial history,” says his adviser, Faculty Fellow Michael Coppedge. “He is pushing a provocative argument, but he has the evidence to back it up. He is a fountain of fascinating details, and his qualitative historical evidence and his statistical analysis tell the same story.”

Owolabi’s thesis is that forced settlement — that is, the mass import of African slaves and/or Asian indentured laborers — generated higher education outcomes at the end of the colonial era and higher levels of democracy up until the present day than did the colonial occupation of indigenous societies.

“This divergence,” Owolabi maintains, "is because some form of metropolitan citizenship was introduced in the forced settlement colonies—primarily located in the West Indies and the small offshore African islands—after the abolition of slavery in the mid or late 19th century.

“Legally, freed slaves became citizens or subjects of the metropolitan state, which promoted education as a way of cultivating patriotism while at the same time, imposing social control.”

Despite significant economic inequality coupled with persistent poverty, he says, these societies achieved surprisingly high levels of educational attainment by the end of the colonial era, and relatively high levels of democracy following independence.

“Generally, many of the benefits extended by the state were confined to colonial settlers,” he asserts. “Access to education was extremely limited in these countries for much of the colonial era, and colonial rule usually gave way to authoritarian single-party regimes and/or military dictatorships following independence. For most African countries, democracy began to emerge only during the 1990s.”

As Coppedge notes, Owolabi’s thesis is a unique combination of statistical analysis and archival research. The statistical analysis involves coding the nearly 100 countries decolonized after World War II for such
factors as school enrollment, adult literacy, and ethnic fractionalization.

It is the case studies, though, in which Owolabi compares two British colonies—Jamaica and Ghana—and two Portuguese colonies—Cape Verde and Guinea Bissau—that elucidate his point.

“By examining countries individually,” he explains, “I can delve into the sequencing and long-term developmental consequences of specific reforms, rather than merely rating the postcolonial outcomes.”

Owolabi credits his Kellogg Institute funding — a Graduate Research Grant after his third year of study and a Dissertation Year Fellowship — with giving him the opportunity to dig deep into archives in Lisbon
and London.

“Much of my argument hinges on evidence from these colonial archives—personal correspondence, school enrollment records, governmental records, and newspapers. These materials explain why citizenship rights were extended in forced settlement colonies following slave emancipation, and denied to indigenous populations in the colonies of occupation.”

Owolabi, a two-time recipient of the Graduate Student Union’s Outstanding Teaching Assistant Award, will defend his dissertation later this year. In August, he joined the faculty of Villanova University with a
tenure-track appointment in the Department of Political Science.