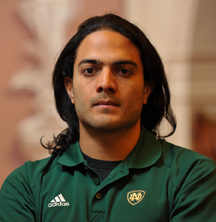 Six years ago, electrical engineering doctoral student Hubert George was an undergraduate at the Universidad de los Andes in Bogotá, Colombia. His father, a neurologist and public health administrator, was mayor of the city of Barranquilla (the fourth-largest city in Colombia, with a population well over one million); his mother a respected lawyer there; his sister a student. Life changed suddenly for all four when, due to safety issues, the family decided quite suddenly to emigrate to the United States.

One year later, George began his doctoral studies at Notre Dame. Having already made the campus his home for a summer, he says he returned to earn his doctorate at an institution with “a long tradition of academic excellence and one with clear strengths in my research field of electronic materials and devices.”

As a fourth-year doctoral student and Ph.D. candidate, George now works in one of the College of Engineering’s signature fields: nanotechnology. As are many graduate students at the University, he is an integral member of a research team — in his case, one that is working to develop technologies that may have important — even revolutionary — applications both in computer engineering and the medical imaging field.

George’s work takes place within Notre Dame’s Nanoscale Interdisciplinary Research Team (NIRT), which, in 2006, won a $1.2 million grant from the National Science Foundation. Composed of physicists, engineers, and chemists, the team was created to investigate and unveil the cause of a phenomenon in nanoscale structures known as fluorescent intermittency, often referred to as “blinking.”

George is working on a team within the larger NIRT team headed by his two advisers, Prof. Snider and Prof. Alexei Orlov. Their particular task is fabricating single-electron transistors (SETs). These devices are the most sensitive charge detectors available, capable of measuring small fractions of an electron. The SETs they devise will be used to investigate possible links between charge changes in nanostructures and their blinking behavior.

Once the blinking can be understood, team members believe that it can be controlled; once controlled, there are many exciting potential uses — some of which relate to the medical field. George explains: “If fluorescent molecules replace the dyes now used in medical imaging procedures to detect cancer cells or the presence of infection, the entire medical imaging field will be revolutionized. Current dye imaging will be seen as crude compared to analysis at the molecular level. We are envisioning procedures that provide researchers with real-time images of cancer cells or viral infections, such as Human Immunodeficiency Virus (HIV).” Other potential applications, George notes, are in the computer engineering field and involve “the development of new and better technologies as a more in-depth understanding of SETs is gained through our team’s work.”

The work is moving forward in state-of-the-art laboratories within the new, $69-million Stinson-Remick Hall of Engineering. Those laboratories are home to George, his advisers, and fellow graduate students. He no doubt speaks for all when he says: “I am proud to be part of a team that is contributing to research that could have a profound impact in the research community and, more importantly, holds promise for vastly improving the technology and health care available to all of us.”