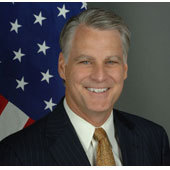 Ambassador Roemer earned master’s and doctoral degrees in political science from Notre Dame in 1981 and 1985, respectively. Elected in 1990 to represent Indiana’s Third Congressional District in the U.S. House of Representatives, he served six terms in Congress and was deeply engaged in that time in efforts to improve access to education and to raise standards for it. He was also a principal sponsor of successful legislation to establish the AmeriCorps national service program and co-author of a bill to expand Head Start services.

After his service in Congress, Ambassador Roemer was a prominent member of the national 9/11 Commission. He subsequently served as president of the Center for National Policy in Washington, D.C., a moderate think-tank dedicated to sparking bipartisan dialogue and actively encouraging solutions to America’s most important national security challenges.

In 2009, President Barack Obama appointed Timothy Roemer United States Ambassador to India. In that role, he is charged with leading one of America’s largest diplomatic missions. He has principal responsibility for broadening and deepening the multi-faceted U.S.-India partnership, as the world’s oldest and the world’s largest democracies address the challenges of the 21st century.

In applauding his former student’s selection as the Distinguished Alumnus winner, Ambassador Roemer’s adviser at Notre Dame, Prof. Peri Arnold, noted: “Tim presents a model of political scientist as a public policy practitioner. His deep concern for the quality of government’s performance inspired his doctoral studies and research. That Notre Dame education prepared him for a career in public service that has, in fact, contributed significantly to improving government’s performance.”