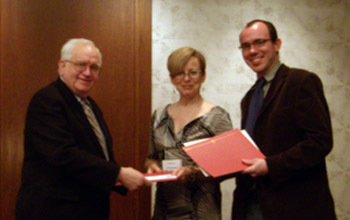 An article by Julia Douthwaite, professor of French in Notre Dame’s Department of Romance Languages and Literatures, and then-graduate student Daniel Richter (M.A. 2008) was honored as the “Best Article of 2009” by the editorial board of the European Romantic Review and the executive committee of the North American Society for the Study of Romanticism. The prize was awarded for “The Frankenstein of the French Revolution: Nogaret’s Automaton Tale of 1790,” European Romantic Review, 20, 3 (July 2009): 381-411. It was presented to Douthwaite and Richter on August 21, 2010, in Vancouver, Canada.

“I am thrilled with the award,” Douthwaite says, “and also proud that it is the result of a unique collaboration with a student.”

She elaborates: “Daniel and I first began working together when he provided important research support for my ongoing book project on the literature of the French Revolution. He then helped organize the conference, “New Paradigms for Revolutionary Studies: Franco-American Colloquium” held October 6–8, 2008, at Notre Dame and Indiana University South Bend.

“Building on the excellent relationship that we developed through this work together, I invited Daniel to further collaborate with me in the analysis of what is arguably my most exciting finding to date: a 1790 tale by François-Félix Nogaret which features a character named Frankenstein, who creates a life-size automaton! Mary Shelley, who published the classic Frankenstein in 1818, 28 years later, claimed that the idea for the Frankenstein story came to her in a dream. Daniel researched connections between Mary Shelley and the text by Nogaret by studying Shelley’s journals, the writings of Mary Wollstonecraft and William Godwin (Shelley’s parents), as well as performing a search of critical literature on Frankenstein and its political meaning. Although Daniel did not unearth any direct causal correlations, he did find a variety of parallels to the 1790 text.

“During the months of June, July, and August 2007, Daniel and I met every ten days or so, and the article gradually took shape. Although I did most of the writing, Daniel was an excellent interlocutor. His insights into the interest of the Nogaret tale for a political comparison with Frankenstein were crucial. Plus, I enjoyed having an interlocutor, and I believe that the article would not have been as lively without his energy and enthusiasm. Working with a member of the younger generation helped me to place this work in a future-oriented framework that I believe will make it a more useful contribution to the field.”

A past recipient of grants from the National Endowment for the Humanities, the Lilly Foundation, and the John Simon Guggenheim Memorial Foundation, Douthwaite is continuing her research on how key events of the French Revolution—in political history, history of science, women’s history, and the psychology of crime—left their imprint on fictions published from 1789–1860. Richter is now a writer located in Philadelphia, and considering pursuing a PhD in French, or an MFA in Creative Writing, in 2011.