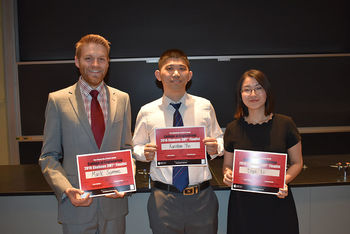 The goal of the Shaheen 3MT® competition is for Ph.D. students across all disciplines to explain their research in a language appropriate to an audience of specialists and non-specialists alike in under three minutes. Competitors must address a live audience and a panel of judges. Their presentations must be accompanied by a single static slide.

The energy of the event, held in DeBartolo Rm. 155, was a testament to the spirit of interaction and support in the College of Engineering. In addition to the nine presenters in the Engineering prelims, an audience made up of colleagues, siblings and friends was also there to watch the presentations.

The competition served to showcase the breadth and depth of the presenters and their research. Ameer Armaly (Computer Science and Engineering) kicked off the evening with his research into the differences between blind versus sighted computer programmers and the goal of improving the tools available to aid blind programmers in their work. Aylin Acun (Aerospace and Mechanical Engineering/Bioengineering) shared her work into the development of an aged engineered heart created using converted human skin cells to act as beating heart muscle rendering a representative tissue sample that would thereby decrease the number of false positive and negative results obtained in traditional animal studies.

Kenton Murray (Computer Science and Engineering) presented on his particular field of computer science called machine translation and the development of models that will allow translation, preservation and documentation of many overlooked world languages which will have broad impacts in disaster relief, academia and industry. Elia Shahbazi (Computer Science and Engineering) shared his analysis of neuroactivity in the brain through mapping methods that are five times faster than the usual deep learning approaches and will lead to a better understanding of neuropsychiatric disorders such as autism.

Finalist Mark Summe (Chemical and Biomolecular Engineering) spoke about his design and development of contaminant filtering membranes that act like magnets for the filtering of specifically targeted molecules such as chiral drugs that can be printed on your average fast and cheap inkjet printer by swapping inks and paper for more functional polymers and better pore support materials. Sarah Hickam (Civil and Environmental Engineering and Earth Sciences) presented her research on the recycling of uranium that is left over after production of electricity in the US where about 70,000 metric tons of used nuclear fuel has been building up at reactor sites since the 1960s. Sarah’s research seeks new and unconventional solutions for managing Uranium at the nanoscale. Finalist Diya Li (Chemical and Biomolecular Engineering) delved into her research on highly sensitive and specific biosensors for the early detection of breast cancer using tiny hair-like structures called carbon nanotubes to detect molecules in extremely low concentrations that indicate not only the existence of breast cancer, but specific types leading to the application of proper treatments.

Finalist Xunzhao Yin (Computer Science and Engineering) is working on the disparity between the amount of energy required by computers to run artificial intelligence, or AI. Currently computers on which AI runs require 50,000 times the units of energy as compared to the human brain to do the same tasks. Xunzhao’s research aims to create newer and more simplified computing structures that better replicate the neurons of the brain reducing the amount of energy required. Nikolaus Kleber (Electrical Engineering) spoke about the fixed radio spectrum in relation to wireless usage which is increasing placing even more demand on spectrum. However, it is currently unclear exactly how spectrum is being used and inaccuracies exist as to how much spectrum is utilized by large users such as the US Navy. Nikolaus’ has developed a sensor which operates at a fraction of the cost of current sensors to be used to monitor spectrum usage, and build a more accurate data driven model of usage leading to more efficient spectrum allocation and providing a better quality of spectrum usage to end users.

The stage is now set for the finals, which will take place at 5 p.m. on April 23 in the Jordan Auditorium in the Mendoza College of Business.