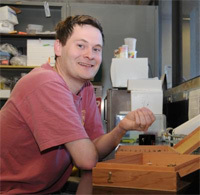 Andrew Forbes, who received his Ph.D. in biology from Notre Dame in August 2008, is the first author on a recent publication based on his doctoral dissertation research in the journal Science, one of the premier science journals in the world. The article was featured as part of a special speciation tribute to Charles Darwin on February 6, 2009, and was highlighted in the New York Times’ science section.

Now a postdoctoral research associate at the University of California at Davis, Forbes’ discoveries occurred while he was a member of a Notre Dame laboratory team headed by Biological Sciences Professor Jeffrey Feder. In the Science article, Forbes and his co-authors demonstrate that the introduction of apples to America almost 400 years ago may have ultimately changed the behavior of a fruit fly, leading to its modification and the subsequent modification of a parasitic wasp that feeds on it. The result is a chain reaction of biodiversity where the modification of one species triggers the sequential modification of a second, dependent species.

“The research shows the process of speciation in action and might tell us more about why certain groups of organisms are more diverse than others,” says Forbes. “It also suggests why certain areas and/or biotic regions may have more species than others.”

Feder explains that the research of Forbes and others on his team is important because it provides insights into solving Darwin’s mystery of the origins of new species. “Andrew’s work is a nice demonstration of how the initial speciation of one organism opens up an opportunity for another species in the ecosystem to speciate in kind. Biodiversity in essence is the source for new biodiversity.”

Praising Forbes in particular, Feder says: “Andrew is an unusually creative and diverse thinker. He is also an energetic and effective field and bench scientist. This combination of talents is rare but gives him all the components for a very bright future.”

Work in Feder’s laboratory was supported by the National Science Foundation, including a 2007 Doctoral Dissertation Improvement Grant for Forbes. The NSF posted an article on Forbes’ research that was the lead on its website. The NSF also interviewed Feder about the work of Forbes and others in his laboratory and broadcast that interview as a pod cast.

Forbes was the first author on a total of five papers stemming from his work at Notre Dame and a co-author of six additional peer-reviewed articles and one book chapter. While a student at Notre Dame, he was the organizer of an evolutionary discussion group and an active and highly praised teaching assistant in biology recognized with the Outstanding Graduate Student Teacher Award for Excellence in Teaching.

Dean Gregory E. Sterling said: “Andrew Forbes reflects the caliber of student whom we value highly at Notre Dame. He not only has exceptional ability, but he is creative and energetic. The combination of his ability and work ethic enabled him to make a real contribution while a student and is a strong statement about his future promise. He is one of many excellent graduate students at Notre Dame who are making seminal scientific contributions to our understanding of life and making the world a better place in which to live."