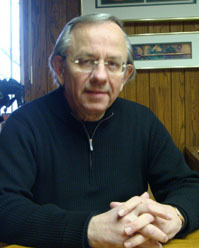 Robert Boguslaski (Ph.D. Chemistry 1966) recently established a fellowship for graduate students at Notre Dame. It will provide stipends for Ph.D. students who have reached their third year of study in chemistry, biochemistry, or molecular biology. Recipients will be selected for their academic achievement, character, and leadership qualities.

As a young boy growing up in Grand Rapids, Michigan, Boguslaski experimented constantly with chemical solutions. Some of his materials were even gathered from the contents of discarded bottles he found while rummaging through the alley behind his home. Intuition and the help of books from the local public library produced several successes and even a few near-disasters. Safe in his first high school chemistry class, though, he recalls thinking: “I know exactly what I want to do.”

Boguslaski earned his undergraduate degree from Aquinas College, and then attended graduate school at Notre Dame at the urging of one of his professors. It was an intense experience—but one, he notes, that “should be exactly that way.”

After a two-year position as a postdoctoral fellow in the Department of Pharmaceutical Chemistry at the University of California Medical Center, San Francisco, Boguslaski returned to the area and Miles Laboratories, which eventually became Bayer Corporation. Building on his work in California, he developed products that combined elements of immunology, organic chemistry, and analytical chemistry before the term “interdisciplinary research” was in common usage. Boguslaski was a leader in Miles’ drug-assay instrumentation team and rose to the position of Vice President of Research and Development.

Boguslaski had taken business courses consistently as part of Miles’ continuing education program and often contemplated various entrepreneurial ventures. In the late ’80s, with a few partners, he struck out on his own and founded Environmental Test Systems (ETS), and later, Serim Research Corporation. ETS was sold approximately 10 years ago. Currently Boguslaski is president of Serim Research Corporation, which develops, manufactures, and markets test strips based on a patented dry reagent technology. The test strips replace complex and cumbersome multi-step wet chemistry colorimetric assays. Serim’s test strips have a number of uses — a prime one is testing for disinfectants and water quality in thousands of dialysis and surgical centers worldwide. Its newest product line is used in the food, beverage, and agricultural industries.

The thrill of solving problems continues for Boguslaski. He is the holder of 25 U.S. patents, the author of more than 65 articles in refereed scientific journals, and the author of Clinical Immunochemistry: Principles of Methods and Applications.