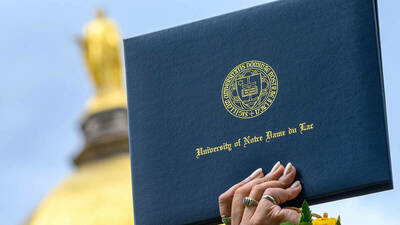 The long-delayed Graduate School Commencement Ceremony for the class of 2020 took place on campus May 28, 2022.

This weekend, hundreds of undergraduate and graduate students of the University of Notre Dame Class of 2020 returned to their alma mater for long-awaited in-person Commencement Ceremonies. The returning students completed their studies in 2020 and had their degrees conferred virtually in the first year of the pandemic. In total, more than 800 students from the Graduate School earned degrees during the 2019-2020 academic year and nearly 80 returned for their on-campus ceremony on Saturday (May 28) in Leighton Concert Hall in the DeBartolo Performing Arts Center. The event was hosted by Laura Carlson, vice president, associate provost and dean of the Graduate School and a professor of psychology.

Professor of theology Joseph Wawrykow, the 2020 winner of the Rev. James A. Burns, C.S.C., Award, began the ceremony by giving the invocation. He implored the Virgin Mary to intercede in the lives of the graduate students and grant them the gifts of wisdom and prudence.

“Within and across their chosen fields and specializations, may they be women and men who foster peace and justice, who nurture harmony and reconciliation, and who build up the human community,” Wawrykow said. “And may Mary of Nazareth, Notre Dame, our Mother, continue to watch over and protect both this University which bears her name, and all of us who have been entrusted with the sacred task of forming the minds and hearts of those who study here.”

Chris Maziar, vice president and interim provost, introduced the commencement speaker, Robert J. Bernhard, vice president for research and a professor in the Department of Aerospace and Mechanical Engineering. Maziar explained Bernhard’s long and winding road to Notre Dame, waylaid first by a lack of funds to study at the University, and then by a blizzard that prevented his visit to interview for a professorship. Ultimately, after working for Westinghouse while completing his graduate studies at the University of Maryland and then his doctorate at Iowa State University, he landed at nearby Purdue University. At Purdue, he held leadership roles at the Institute for Safe, Quiet, and Durable Highways and the Ray W. Herrick Laboratories before being named associate vice president for research for center and institutes. He joined Notre Dame in 2007 to help bring to life the vision of Notre Dame President Rev. John I. Jenkins, C.S.C., for the University to be one of the preeminent research institutions in the world, while remaining true to its Catholic identity.

Bernhard urged the graduates, some of whom he noted had involuntary gap years due to the pandemic, to embrace “the uncomfortable middle” following graduate school and other life transitions. He noted some might be contemplating further schooling, while others had already accepted and been working at their first postgraduate job. Either way, he encouraged all to examine their paths in the hope that they would truly be fulfilled.

“This uncomfortable middle is one time in particular when I hope that your Notre Dame experience will make a difference. Decisions in this uncomfortable middle are life-changing and should be made based on your values,” Bernhard said. “The third leg of the transition process is the new beginning. The literature says, and my observations confirm, that if you are conscientious about your ending and the discernment of the uncomfortable middle, you will start the new phase of life with enthusiasm and commitment.”

Using his own career, his observations of others and scholarship on leadership as examples, he underscored that life and career decisions and transitions are not always linear. Assessment of one’s path requires true self-awareness, authenticity, integrity and inclusiveness.

“Whenever I’ve had the opportunity, I’ve asked about the life story of people I admire — people who are accomplished, fulfilled and contented … sort of serene and self-confident. I have yet to hear anyone say that things went anywhere close to plan. They all pretty much describe a sequence of transitions — some involuntary, some invited or enabled by a mentor, some opportunistic and some deliberately sought,” he said. “My observation of these highly successful and fulfilled people is that they didn’t make this entire sequence of correct decisions by accident; they were consistently making values-based decisions. They chose to work for a company with clear values and a culture of inclusiveness and support. They chose to work with selfless people with clear values. They consistently chose the option that used their God-given talents or the option to which they were called.”

Bernhard, who has announced plans to retire next month, wanted to leave the graduates with a “short, pithy phrase” they could take with them to help guide them to align their aspirations with their individual calling.

“The best term I can think of is ‘joy,’” he said. “Joy seems like a good term for the combination of happiness, satisfaction, pride and well-being. So the catchphrase I offer today consists of two words: Seek joy. Remember to be patient and deliberate with the uncomfortable middle. And when you are looking for the North Star to help you make the right decision among various potentially good options, seek joy!” [Read Dr. Bernhard's full Commencement remarks.]

At the conclusion of the commencement speech, Carlson, who will soon leave Notre Dame to become provost at the University of Delaware, transitioned to the celebration of degrees previously conferred, beginning with recipients of doctoral degrees. Each graduate, having already received their diploma by mail in 2020, was gifted a diploma holder with an image of the Hesburgh Library overlaid with the words: “On this day: we acknowledge adversity beyond your control. We recognize your resilience. We honor your dedication to scholarship. We celebrate your long-overdue commencement ceremony.”

After a special prayer for the graduates, deans of the colleges announced the honorees as advisers hooded doctoral candidates. Carlson then announced awards for exceptional achievements in scholarship and mentoring. Winners of the Eli J. and Helen Shaheen Graduate School Award in attendance were Tyler Curtis from the graduate program in bioengineering, honored for his work on biomedical imaging and spectral computed tomography; Paola Uparela from the Department of Romance Languages and Literatures, honored for her research on transatlantic early modern literary and cultural studies; and Dustin Stoltz from the Department of Sociology, honored for his research on inequalities in wealth and politics. Wawrykow was, again, acknowledged as the 2020 winner of the James A. Burns, C.S.C., Graduate School Award for his many contributions to mentoring and supporting graduate students. Lastly, graduates who earned master’s degrees were recognized.

Father Jenkins closed the program, acknowledging that it was a long time coming and praising graduates for their ability to continue with their studies and research amidst a global pandemic. He also reminded the graduates to thank their families and others who supported them while they pursued graduate studies. Father Jenkins reiterated Bernhard’s advice to “seek joy,” then stressed service beyond self.

“A critical part of living a good life is finding the way in which you are called to use your learning for a purpose beyond yourself. As Pope Francis has said, ‘We must not forget that true power, at whatever level, is service.’ My hope for each of you is that you find and direct your learning and efforts to service,” he said. “Graduates, we congratulate you, we celebrate you and we wish you every success. Thank you for your presence here with us. The class of 2020 will always hold a special place in the history of Notre Dame. We look forward to hearing of all the great things you will do with what you have learned here at Notre Dame.” [Read Fr. Jenkins's full charge and benediction.}

Originally published by Colleen Sharkey at news.nd.edu on May 29, 2022.