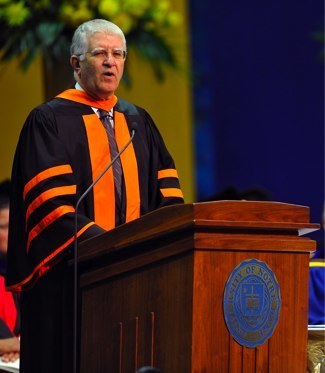 Andrew W. Mellon Foundation President Don Michael Randel told 2009 University of Notre Dame master’s and doctoral degree recipients during his commencement address on Saturday, May 16th, that they are part of the deep intellectual infrastructure of the nation and that they must also be its guardians. (See full text.)

Randel, a prolific and internationally prominent historian of music, also received an honorary degree Sunday, May 17th, during the University’s 164th Commencement exercises.

Randel referenced America’s current economic crisis and noted, “In an effort to find solutions, we hear a great deal about economic stimulus through investment in our crumbling infrastructure. This usually means projects to improve bridges and highways and the like, especially for those projects that are ‘shovel ready.’ And this is all well and good.

“I wish to assert, however, that those of you receiving degrees today are among the ‘shovel readiest’ projects of the most important part of national infrastructure, an infrastructure that is being allowed to crumble just as surely as countless bridges and miles of highways. I refer to the deep intellectual infrastructure of the nation, which has been the engine of such strength and prosperity as we have known and which is crucial to maintaining such strength and prosperity as we may wish to enjoy in the future.”

Randel said that when he used the term “deep intellectual infrastructure,” he meant something truly deep.

“Will we decline to settle for being the strongest and richest nation in the world and insist in addition on being the most thoughtful and humane of nations in the treatment of its own people and in its relations with the other peoples with whom we share the globe?,” he said.

“If we are to insist on this higher aspiration, we will need for every one of you to be not just able professionals in whatever field, but to be, as well, examples of and promoters of the life of the mind that must characterize more aspects of society than it does today. You are part of that deep intellectual infrastructure of the nation, and you must simultaneously be its guardians.”

Randel also cautioned the degree recipients not to let the boundaries of their professional disciplines cut them off from their calling to be broader guardians of the nation’s intellectual life.

“Faith and love, broadly defined, almost certainly are the things that make life most worth living and provide the surest guides to how one might actually go about the world, and we must guard against letting ourselves be cut off from them by our high professional aspirations and what we think our disciplines enables us to know,” he said. “We must certainly not run the risk of cutting others off from them by exaggerating the importance of our high professional aspirations (whether academic or not).

“This, then, is a plea for you to cultivate and be guardians of the nation’s intellectual life but to do so with modesty and to shun arrogance — to recognize that the limits of what you know and to be open to what others may know and to their ways of knowing — to recognize that your academic training in whatever field is almost certainly not the equal of the most fundamental questions about how one ought to live one’s life. You have had the good fortune to study at a university that forcefully proclaims faith and love as its foundational values. Do not let those values be overwhelmed by anything that your advanced degrees might enable you to undertake.”

The recipients of several Graduate School awards were also recognized during the Commencement ceremony.
The top graduating doctoral degree students in the humanities, social sciences, science and engineering were honored with Eli J. and Helen Shaheen Graduate School Awards. The honorees were Rachel B. Gettman in chemical and biomolecular engineering, David Andrew Teeter in theology, Stacy L. Hoehn in mathematics, and Naomi V. Ekas in psychology.

Danny Z. Chen, professor of computer science and engineering, was presented with the University’s Rev. James A. Burns, C.S.C., Graduate School Award. The award is given annually to a faculty member for distinction in teaching or other exemplary contributions to graduate education and honors the first Notre Dame president with an advanced degree.

The recipient of the Distinguished Alumnus Award, Matthew O’Donnell, Frank and Julie Jungers Dean of Engineering at the University of Washington, also was recognized during the exercises. O’Donnell, who was graduated from Notre Dame with a bachelor’s degree in 1972 and a doctorate in 1976, is a biomedical engineer who is renowned for his interdisciplinary focus.