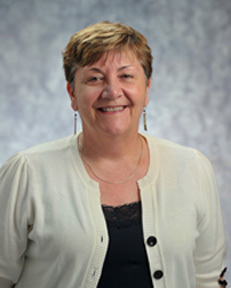 Dr. Barbara Turpin, associate dean of students in the Graduate School, will retire from her position at the end of May.

Turpin graduated from Boston’s Emmanuel College with a major in physics. She earned a master’s in the history of science at the University of Wisconsin and then, in 1980, her doctorate in history from Notre Dame. Her dissertation focused on the evolution of the concept of the electron in 19th-century physics.

In 1990, Turpin was the first hire of the newly appointed dean of the Graduate School, Nathan Hatch. She served as Director of Admissions for seven years, and then assumed a role more similar to her current role as Associate Dean of Students.

In honoring her at a Graduate School luncheon last week [see Remarks of Associate Dean Barbara Turpin on the Occasion of Her Retirement Luncheon], Dean Sterling said: “Barb’s accomplishments as an associate dean are too numerous to list, but I would be remiss if I did not mention a few. She served as the institutional coordinator of the most recent NRC survey—a monumental undertaking, but her work was done capably and efficiently. For her exemplary work on this Herculean task, as well as her body of work in the Graduate School, Barb was deservedly awarded a University Presidential Award in 2007. And, this past academic year, Barb chaired a Graduate School committee on Family Friendly Policies and wrote a report that was the foundation of new Graduate School accommodation policies for students who care for young children."

Dean Sterling continued: “Barb’s knowledge of Graduate School policies and procedures is encyclopedic. She is, however, far more than a treasure trove of policies and procedures, she is a wise counselor who knows how to apply the policies. I have been grateful that, while sympathetic to the issues that can arise in students’ lives, she administers those policies with an awareness of how important it is for the Graduate School to maintain the highest academic standards. It is her ability to balance individual and programmatic needs that has made her voice so valuable to so many of us.”

Outside of her service in the Graduate School and on numerous University committees—including the Faculty Grievance Committee, the Gender Studies executive committee, and the University Committee on Women Faculty and Students, Turpin is an author who has published numerous articles in Notre Dame Magazine and Common Sense. In addition to the President’s Award, she was named the Lyons Hall Woman of the Year in 1990 and received the James E. Armstrong Award of the Alumni Association in 1996.

A search is underway for a new Associate Dean of Students.