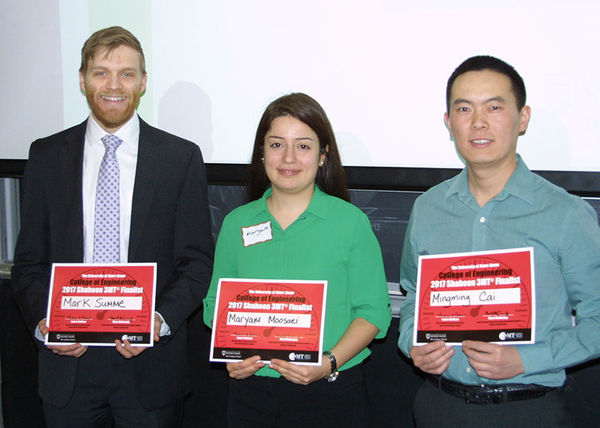 The goal of the Shaheen 3MT® competition is for Ph.D. students across all disciplines to explain their research in a language appropriate to an audience of specialists and non-specialists alike in under three minutes. Competitors must address a live audience and a panel of judges. Their presentations must be accompanied by a single static slide.

The energy of the event, held in a full lecture hall in DeBartolo Hall, was a testament to the spirit of interaction and support in the College of Engineering. 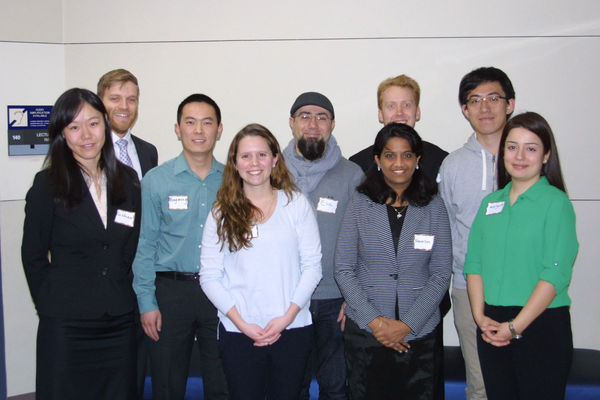 The competition was electric as evidenced by the dynamic, articulate, and engaging presenters. Jian Xu (Computer Science and Engineering) gave insight into his research into the potential control of the invasive zebra mussel species, a mollusk that doesn’t even swim and yet costs corporations upwards of 120 billion dollars a year by by interfering with the shipping industry. Jian’s looks to build a species invasion risk model to minimize interruption. Neerajha Nagarajan (Bioengineering) presented her research on the design and development of cell-based submergible, swimming biorobots that may one day replace the the current methods for endoscopy.

Tracie McGinnity (Bioengineering) shared her work into the use of Gold nanoparticles to target cancer cells while both providing greater X-ray attenuation and also lowering dose requirements that may ultimately lead to more diagnostic accuracy and a reduced need for subsequent surgeries for breast cancer. Yushan Zhang (Chemical and Biomolecular Engineering) shared her research into decreasing the costs of cancer and allergy treatments by reducing the expense involved in the purification of monoclonal antibodies, which the body utilizes in fighting foreign invaders such as bacteria and viruses.

Ali Shahbazi (Computer Science and Engineering) explored the mapping of the intricate circuitry of the brain using a new unsupervised method for 2D segmentation and 3D reconstruction with genetic marker tags. Unlike previous supervised methods, this algorithm exploits cell-specific context clues in hopes of finding a new method that is less computationally expensive and more immediately useful.

Kevin Leyden (Aerospace and Mechanical Engineering) spoke about his research into fractional derivatives for efficient modeling of complex systems, or robot swarms, such as a group of self driving cars.

Lisa Michaels: “It was exciting to see the engineers step up, and in some cases, go outside of their comfort zones to become better and more concise presenters of their research. The venue was full of colleagues and friends showing support to the Ph.D candidates who were presenting and they eagerly awaited the results. It was fascinating to learn more about the diverse and complex research being done in the College of Engineering.”

The stage is now set for what should be a great finals event between the 9 finalists on March 27 in Jordan Auditorium in the Mendoza College of Business at 4 p.m.