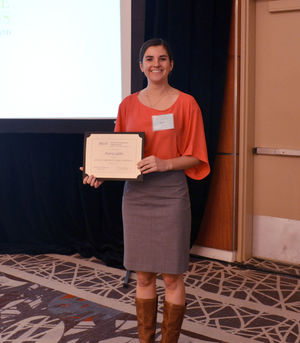 CHICAGO — Maria Gibbs, from the Department of Civil and Environmental Engineering and Earth Sciences, won the inaugural Three Minute Thesis Competition (3MT) hosted by the Midwest Association for Graduate Students (MAGS) on April 8.

The goal of the 3MT competition is for graduate students across all disciplines to explain their research in a language appropriate to an audience of specialists and non-specialists alike, all within three minutes. Competitors must address a live audience and a panel of judges. Their presentations must be accompanied by a single static slide.

The morning’s competition comprised preliminary presentations from 23 other regional universities, with a finals round shortly following. Gibbs bested the three finalists from the University of Missouri, Loyola University, and Indiana University – Purdue University Indianapolis, for a top prize of $500.

In many ways, a successful 3MT presentation harkens to the same drama, the same emotional and intellectual intensity, as a stirring theatrical monologue. As in its theatrical counterpart, a 3MT presentation sets a scene, and a character reveals herself, her passions, and commands an audience’s attention with conviction and poise. The theatrical illusion was somewhat broken on the morning of the competition, however, where the corridors and benches of the Meeting Floor of the downtown Embassy Suites, where MAGS was held, acted as the backstage space for graduate students who paced to and fro, and practiced in low whispers their speeches over and over.

Gibbs waited in Salon F for her prelims to commence, in a middle row seat next to the wall. She was serene, if not indifferent, to the competition’s outcome, but quite eager to here about her competitors’ research. “I’m happy to be here, but if I don’t make it through this round, it’s okay, I suppose I’ll go home earlier,” she explained. “And if I do make it to the next round, then I’m a finalist, and that’s also good.” Was she nervous at all? “No, no,” she said. “I am excited to hear the other presentations, to see what other grads are doing.”

The other competitors eventually filed in and the moderator called forth the first contestant. 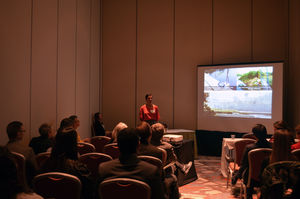 Gibbs presenting during the morning prelims at the MAGS 3MT competition.

Gibbs was the eighth presenter of ten. Her presentation, Dancing Bridges: A Human-Centered Approach to Prevent Flutter in Footbridges, succinctly and dynamically described the social impact of her research into better footbridge construction through design thinking. A safe footbridge, per Gibbs’s description, “created access to a better future for 50 of my friend’s students.” Her coup de grace followed in the next sentence: “My research will make futures like that possible for hundreds of thousands of students, farmers, and mothers, in isolated communities all over the world.”

Gibbs had delivered the same speech, with the same resounding ending, twice before. First, during Notre Dame 3MT’s Engineering’s Prelims, back in February, and again a month ago, during the University’s Finals. Her delivery has not changed. She rises, she takes her place before the audience, and she begins speaking with absolute confidence and poise—as though what she were saying was the product not of careful scripting and timing and rehearsing, but of innate knowledge. Her gestures—when she describes the way wind can set a bridge to swaying and rippling and tearing itself apart—are expressive and smooth. Her oration is unpretentious and warm. The story she tells is heartening.

With the MAGS 3MT prelims finished, Gibbs gave no indication as to how her presentation went. She was, instead, quick to comment on the high caliber of the competition. “Those were fascinating! There’s such an emphasis now on industry and environmental impact, it’s clear the conversation is heading toward sustainability.”

I pointed out how one competitor choked at the fulcrum of his presentation. He was deep in the set-up of his research question—“Do family relationships affect team performance?”—when he went silent, frozen. It took maybe fifteen seconds for him to pick back up the thread of his discussion, which dealt with the family backgrounds of the players on winning college sports teams, and his finish was rocky and disjointed.

While Gibbs agreed with my assessment of his performance, she was quick to qualify the merits of his research. “So, the 3MT format threw him—it could happen to anyone.” This is true: three minutes, a panel of judges, and an anxious audience of peer competitors does not create the ideal space for detailing your research passions, for robust repartee. Gibbs continued, “But his question is so interesting, I wanted to know more about his own family background, I wanted to know more about the application of his findings to organizations beyond team sports. It says something profound about our work behavior, about our team performance, if we take into account this pretty intuitive element—how we cooperated in a household while growing up. His idea has depth and elegance.”

Gibbs sat in the Ballroom while the preliminary winners were announced in the atrium outside, so she missed hearing the news that she would be presenting one more time, against three other MAGS finalists. I was in the atrium getting more coffee when the organizers called out, “Maria Gibbs. . . . Is Maria Gibbs here?” I assured them she was.

Gibbs was as confident and serene in her fourth 3MT presentation as the previous three. “Did I repeat myself?” she asked when she sat down. “I was thinking to myself, ‘Have you said that?’ ‘No, keep going.’”

This anxiety did not show. Gibbs was entirely on point while also, apparently, parallel processing.

The presentation of awards followed shortly thereafter. Finalists were congratulated, the second place was announced, and then the first: “Maria Gibbs, University of Notre Dame.” 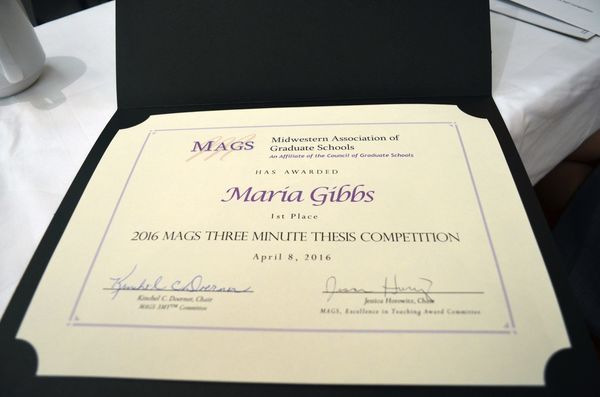