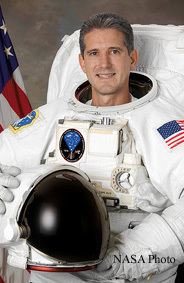 University of Notre Dame alumnus Michael T. Good, an Air Force colonel, was a member of the Space Shuttle Atlantis Mission STS-125 crew that successfully repaired and upgraded the Hubble telescope last month. The flight was Good’s first shuttle mission. He took a Notre Dame pennant with him into space.

The 11-day mission included five spacewalks to refurbish Hubble with state-of-the-art science instruments. The telescope is now 90 times more powerful than when it was launched in 1990 and should function for another five to 10 years. The mission, considered one of NASA’s most challenging yet, had been scheduled for last fall, but a breakdown of the telescope delayed it.

Good, a native of Broadview Heights, Ohio, was graduated through Notre Dame’s ROTC program in 1984 with a degree in aerospace engineering and earned a master’s degree in the same field from the University in 1986. He was then assigned to Elgin Air Force Base, Fla., as a flight test engineer for the cruise missile program.

He earned his wings in 1989 as a weapons system officer and flew F-111s. In 1993, he was selected to attend the Air Force Test Pilot School at Edwards Air Force Base, Calif., and was graduated the following year.

Good was selected by NASA as a mission specialist in 2000 and, following completion of two years of training and evaluation, he was assigned technical duties in the Astronaut Office Advanced Vehicles Branch and subsequently served in the Space Shuttle Branch.