The highest honor bestowed on Notre Dame graduate students, the Eli J. and Helen Shaheen Awards were established in 1990 and are named for two long-time benefactors of the University. They recognize excellence as a graduate student in any one or a number of areas: grades, research and publications, fellowships or other awards, teaching, mentoring, and postgraduate positions offered or accepted. One Shaheen award winner is selected in each of the four divisions of the Graduate School—Engineering, the Humanities, Science, and the Social Sciences.

The 2014 Shaheen Award recipients are: 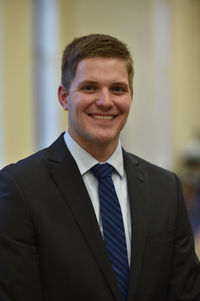 Jeffrey Christians was honored for his pioneering research with thin film solar cells. Under the direction of Prof. Prashant Kamat, Jeff applied the lab’s expertise in time-resolved spectroscopy to further understand the charge-transfer processes that lead to charge separation and, ultimately, electricity generation, in solar cells. He then developed a model to describe the complex dynamics of charge separation and pinpointed the rate-limiting step in this model system. Most notably, his use of inorganic hole conductors in perovskite solar cells and the study of their degradation is a groundbreaking contribution in the field.

Jeff’s work resulted in seven scientific papers—five as first author—that have appeared in prominent journals. One, unique in its description of detailed methodologies for measuring device efficiency, was downloaded more than 1000 times in the first two weeks of its publication. He has also posted educational presentations on Slideshare and YouTube that have more than 10,000 downloads.

Jeff is joining the National Renewable Energy Laboratory in Golden, Colorado, as a postdoctoral researcher working under Dr. Joseph Luther. 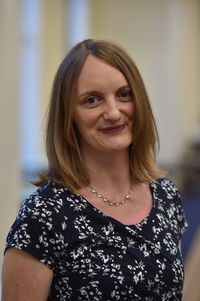 Ailbhe Darcy was honored for her extraordinary success both as a poet and as a literary critic. Under the direction of Prof. Briona Nic Dhiarmada, Ailbhe’s dissertation examines how contemporary Irish poets have responded to current pressures, including recession, emigration, and particularly the changing role of the Catholic Church.

While a doctoral candidate, Ailbhe earned her MFA in Creative Writing from Notre Dame, advised in this endeavor by Prof. Joyelle McSweeney. Ailbhe’s book titled Imaginary Menagerie was shortlisted for Ireland’s prestigious Strong Award, which recognizes new poets’ collections. In 2012, a poem from that collection was featured in The Guardian as the “Poem of the Week”—one week after the editors selected a poem by Shakespeare for this same honor.

Ailbhe is also an excellent and admired teacher. She twice won an Outstanding Graduate Student Teaching Award for her role with undergraduates, first for a course on Writing and Rhetoric and then for a course she designed on discovering America through Irish literature. 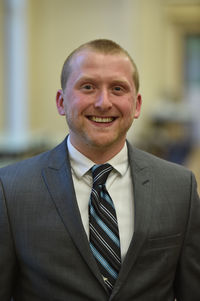 Douglas Hines was honored for his tremendous impact in the investigation of cost-effective alternatives to the traditionally high-cost materials used in photovoltaic devices, or solar cells, which directly convert sunlight to electricity. Under the direction of Prof. Prashant Kamat, Douglas investigated the ways in which chemical modifications of quantum dot surfaces can affect their stability, excited state properties, and charge-transfer capabilities. His research has advanced understanding of electron-transfer processes in semiconductor nanocrystals, and has helped to identify the ideal conditions for the preparation and operation of quantum dot solar cells.

Doug’s research resulted in five first-author publications in high-impact journals, including three articles in the Journal of Physical Chemistry.

Next year, Doug will be a visiting assistant professor at Lycoming College in Williamsport, Pennsylvania. 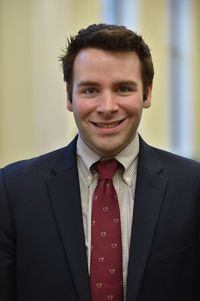 Michael Hartney was honored for his contributions to research on the causes and consequences of teacher organization and activism in the United States. In a dissertation directed by Profs. David Campbell and David Nickerson, he traces how governmental policies have made teachers a powerful political constituency and then examines the consequences of their politicization, asking specifically whether teacher unionization affects students’ academic achievement. Michael’s work provides insight into how the choices citizens make about organizing and governing their schools affect the overall quality of American public education and, by extension, the equality of opportunity in the United States.

Michael won three external grants to support his work, and has published four articles in top journals, including the American Journal of Political Science and Perspectives on Politics.

Michael is now an assistant professor of political science at Lake Forest College in Illinois.