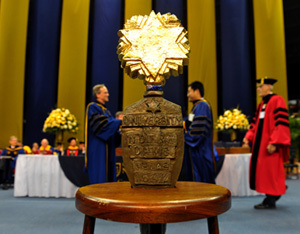 The University of Notre Dame’s Graduate School recognized 278 master’s and 159 doctoral degree recipients and presented several special awards during Commencement ceremonies May 15 in the Purcell Pavilion of the Joyce Center.

Alvin Plantinga, Rev. John A. O’Brien Chair in Philosophy, was recognized as the University’s 2010 Rev. James A. Burns, C.S.C., Graduate School Award recipient. The award is given annually to a faculty member for distinction in teaching or other exemplary contributions to graduate education and honors the first Notre Dame president with an advanced degree.

Stephen Dumont, chair of the University’s Department of Philosophy, said that Plantinga is “widely recognized as the world’s foremost philosopher of religion, and, indeed, one of the top philosophers in the world.”

The recipient of the Distinguished Alumnus Award, Robert Boguslaski, president of the Serim Research Corporation, also was recognized during the exercises. He received his doctorate in chemistry from Notre Dame in 1966.

Serim Research Corporation develops, manufactures and markets test strips based on a patented dry reagent technology. The test strips replace complex and cumbersome multi-step wet chemistry colorimetric assays. Serim’s test strips have a number of uses — a prime one is testing for disinfectants and water quality in thousands of dialysis and surgical centers worldwide.