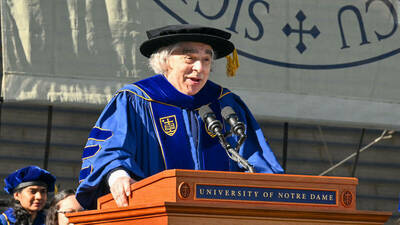 Ernest Moniz, Ph.D., addressed the graduates during the Graduate School’s annual Commencement Ceremony on May 14, 2022 in the stadium at the University of Notre Dame.

Ernest Moniz, the U.S. secretary of energy from 2013 to 2017, encouraged members of the class of 2022 to create a “positive vision of the future” with regard to the nuclear security and climate threats, among other issues, during the Graduate School’s annual Commencement Ceremony Saturday at the University of Notre Dame.

“It’s your world. It needs engagement with your tools and values, with social equity a critical enabler,” said Moniz, the Cecil and Ida Green Professor of Physics and Engineering at the Massachusetts Institute of Technology.

Moniz, who played key roles in both the Iran nuclear deal and the Paris Climate Accords, was the principal speaker for the ceremony, which also featured Laura Carlson, outgoing vice president, associate provost and dean of Graduate School; Christine Maziar, interim Notre Dame provost; Marya Lieberman, professor of chemistry and biochemistry at Notre Dame; and Notre Dame President Rev. John I. Jenkins, C.S.C., among others.

Carlson, who will soon leave Notre Dame to become provost at the University of Delaware, played host for the ceremony; Maziar, who in addition to her interim duties is the vice president and senior associate provost at Notre Dame, introduced Moniz; Lieberman, winner of the 2022 James A. Burns, C.S.C., Award from the Graduate School, delivered the invocation; Father Jenkins delivered the charge to the class, conferred the degrees and offered the benediction. The University celebrated the conferral of 285 doctoral degrees and 532 master’s degrees.

In addition to his past government work and his current position with MIT, Moniz serves as co-chair and chief executive officer of the Nuclear Threat Initiative and as CEO of the Energy Futures Initiative.

He commended Notre Dame for its commitment to clean energy and nuclear disarmament, highlighting, in particular, an effort by the Kroc Institute for International Peace Studies to revitalize Catholic Engagement on nuclear disarmament, as well as Father Jenkins’ role in convening climate change conferences in collaboration with the Vatican alongside current and former leaders from the Mendoza College of Business.

The latter, involving church and industry leaders, resulted in two consensus documents, one advocating for carbon pricing and the other for corporate disclosure of climate change risks.

Still, Moniz said, there is much work to do.

“You have a challenge in addressing the nuclear security and climate threats from the political, technical and social perspectives, all within a society that is increasingly divorced from fact and data — so-called truth decay — which may pose the initial challenge that must be overcome for any of the major issues we deal with,” he said.

“But again, you are among the relatively few with the needed tool set — but you need the will and commitment to use it. It starts by not being paralyzed by the magnitude of the threats, but rather by creating your positive vision of the future — a world that is secure without nuclear weapons and with clean energy and social justice domestically and globally.”

In doing so, he encouraged the graduates to rely on “the values that are associated with this premiere Catholic University.

“Values drive culture,” he said, “and in the words of Peter Drucker, a business management guru of many decades ago, ‘Culture eats strategy for breakfast, operational excellence for lunch and everything else for dinner.’”

Following Moniz’s remarks, Father Jenkins, acknowledging “two years of unprecedented challenges” because of the pandemic, delivered the charge to the class, saying, in part, “We hope you will use the advantages of the education you received here for the common good. We hope that you will use your talents and skills not simply to serve your own interests but to care for the neediest and create a more just society. We hope that you acquired here not only the knowledge to make a good living, but the wisdom to live a good life.”

He also thanked Carlson for her years of service to Notre Dame.

“We could not be more grateful for your colleagueship, your friendship, and for all you have done for Notre Dame and for our students,” he said. “Our prayers and very best wishes go with you as you begin this exciting new chapter. Remember that you always have a home at Notre Dame.”

Along with several others, Moniz will receive an honorary doctor of science degree, on Sunday (May 15) during the 177th University Commencement Ceremony, also at Notre Dame Stadium.

Originally published by Erin Blasko at news.nd.edu on May 14, 2022.