Three members of the faculty and one staff member have been honored with the Notre Dame Graduate School’s annual awards. Dr. James VanderKam and Dr. John Van Engen have been selected as co-recipients of the James A. Burns, CSC Award, with Dr. Brian Baker being selected as the recipient of the Director of Graduate Studies Award. Additionally, Ms. Tracy Cabello was named the recipient of the Graduate Administrative Assistant Award. 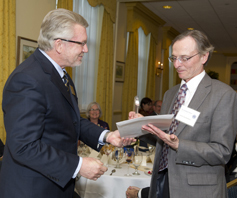 VanderKam, the John. A. O’Brien Professor of Hebrew Scriptures, is a leader in the field of biblical studies, specializing in the Dead Sea Scrolls and pseudonymous literature. He has edited more volumes of the Dead Sea Scrolls than any other scholar in the world and is the author of multiple books on the subject.

Despite his ambitious research agenda, VanderKam is also a superb mentor to his students, directing or co-directing 20 dissertations over the past 18 years. Among his students, 16 have earned tenure or are in tenure-track positions at such institutions as Calvin College, the University of Santa Clara, Canisius College, Fairfield University, McMaster University and the University of Kansas. He has also served on the committees of an additional 21 students. In appreciation of his work, his students presented him with a two-volume Festschrift in November 2011.

VanderKam shares the award with Dr. John Van Engen, the Andrew V. Tackes Professor of Medieval History. His work deals in the areas of cultural and intellectual renewal during the 12th century, religious movements in the later Middle Ages and notions of “Christianization” in medieval European history. Two of his books have been awarded major prizes, with the most recent, Sisters and Brothers of the Common Life, garnering three awards. 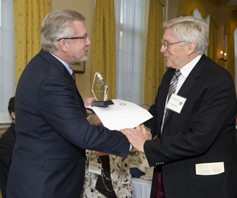 Named after the first Notre Dame president with an advanced degree, the James A. Burns, CSC Award is presented annually for distinction in graduate teaching or other exemplary contributions to graduate education. Father Burns was the leading reformer of Catholic education in this country in the first quarter of the 20th century, with one of his most significant contributions serving to raise academic standards at Notre Dame by recruiting faculty with doctoral degrees. 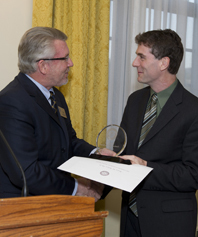 The Director of Graduate Studies Award winner is Brian Baker in the Department of Chemistry and Biochemistry. Baker has sponsored a number of important initiatives in his department, including changes to the early-examination process for doctoral students and, to encourage faculty to support more students on external grants, a change in the department’s teaching assistant support model. He also spearheaded a coursework master’s option for graduate students. Along with his colleagues, in two years, he has raised the number of applications to the Chemistry and Biochemistry program by 80 percent, along with a corresponding rise in the department’s selectivity percentage, one that places Notre Dame’s program above the mean for top-quartile chemistry programs nationwide.

Baker has also been the leading force behind the development of a newly launched doctoral program at the University, the Integrated Biomedical Sciences program, involving five different departments and the best of interdisciplinarity. 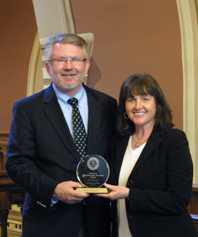 Cabello, from the department of Electrical Engineering, will receive the 2012 Graduate Administrative Assistant Award. She oversees many aspects of the Electrical Engineering office, including the organization of graduate admissions for the department, which has the largest number of applications of any program within the College of Engineering. The department’s Director of Graduate Studies, Prof. Greg Snider, says that Cabello is known for her efficiency, courtesy and the ability to make every applicant and current student feel special. She was praised in particular for customizing applicants’ visits and, even while trimming costs, maintaining a high-quality experience for visitors. Cabello has also been proactive in recruiting applicants from underrepresented populations.