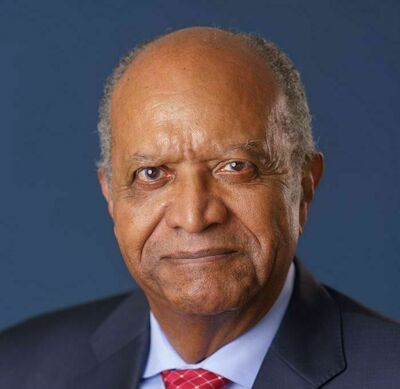 The Graduate School is pleased to announce its annual award winners for the 2021–2022 academic year. These awards include: the Distinguished Graduate Alumni Award; the James A. Burns, C.S.C, Awards; the Dick and Peggy Notebaert Award; the Eli J. and Helen Shaheen Graduate School Awards; and the Social Justice Award. The award winners will be formally recognized for their achievements at the Graduate Commencement Ceremony to be held at Notre Dame Stadium on May 14.

Percy A. Pierre, Ph.D., is the winner of the Distinguished Graduate Alumni Award, given each year to a graduate alumnus or alumna of the University who has contributed significantly to scholarship, research, or society. For decades, Dr. Pierre has been at the forefront of the national effort to bring greater diversity to the field of engineering, both in education and in industry. He has also been elected to the National Academy of Engineering for his service to the U.S. Army. Recognized as the country’s first African-American to earn a doctoral degree in electrical engineering, Dr. Pierre began his academic studies at Notre Dame, where he earned bachelor of science (’61) and master of science (’63) degrees in electrical engineering. Soon after finishing his Ph.D. at Johns Hopkins, Dr. Pierre went on to become the Dean of Engineering at Howard University, where he forged crucial partnerships with other engineering leaders and helped spearhead the creation of a host of organizations — including the National GEM Consortium, founded at Notre Dame — which to this day explicitly work toward enhancing diversity in the engineering and STEM pipeline. Currently the Glenn L. Martin Endowed Professor at the University of Maryland, College Park, Dr. Pierre served on the University of Notre Dame Board of Trustees from 1974–2019 and continues to serve as a Hesburgh Trustee.

Marya Lieberman, Ph.D., is the winner of the James A. Burns, C.S.C., Award in recognition of her outstanding work as a sustained mentor of graduate students over the course of her career. A professor of chemistry and biochemistry at Notre Dame, Dr. Lieberman has become a global leader in the effort to combat the proliferation of substandard and falsified pharmaceutical products throughout the developing world. Together with her students, she has developed Paper Analytical Devices (PADs), inexpensive test cards that can quickly detect whether a drug tablet contains the correct medicines. Dr. Lieberman has been highly intentional about engaging her students in this important work, involving them directly in product development and on-the-ground implementation, assisting them in moving their ideas “out of the lab and into the world.”

Jennifer Schaefer, Ph.D., is the winner of the James A. Burns, C.S.C., Award in recognition of her outstanding work as a mentor of graduate students at the midpoint of her career. An associate professor of chemical and biomolecular engineering at Notre Dame, Dr. Schaefer leads a research lab focused on finding alternatives to the ubiquitous but expensive lithium-ion batteries currently powering most renewable energy products. Such research depends upon a lab with graduate and undergraduate students, and Dr. Schaefer is known within her department for the exceptional training she provides her students. She has also been a tireless advocate for mentoring women and underrepresented minority students within her department and college, working to provide additional support and resources with the goal of improving student incomes and increasing diversity within STEM disciplines.

Umesh Garg, Ph.D., is the winner of the Dick and Peggy Notebaert Award, which honors a faculty member or administrator who has had a significant impact on graduate studies at Notre Dame. An award-winning researcher and professor of physics since 1982, Dr. Garg has directed the nationally renowned Research Experience for Undergraduates (REU) summer program for the Department of Physics for more than twenty years. Participating REU students gain valuable research experience by working with physics faculty on important research projects, and the program has a particular focus on outreach to underrepresented minority students, women, and students with disabilities. Dr. Garg has been instrumental in the program’s success and in inspiring countless underrepresented students to pursue graduate degrees and careers in STEM research they might not otherwise have considered.

Monica Arul Jayachandran, Ph.D. Candidate from the Department of Civil and Environmental Engineering and Earth Sciences is the recipient of the Shaheen Award in Engineering. A decorated scholar pioneering the use of machine learning techniques to solve structural engineering problems, Arul has been internationally recognized for her novel analysis methods and their application to alleviating the devastation caused by natural disasters. Sought after by experts around the globe, Arul has employed machine learning analysis to monitor wind-induced vibrations of the world’s tallest building and has assisted researchers in Italy in analyzing wind records to detect thunderstorms, earthquakes, bridge vibrations, and structure-imperiling waves; all with the goal of helping mitigate their damaging impact. Arul will begin her career in fall 2022 as an assistant professor of engineering at Virginia Polytechnic Institute and State University (Virginia Tech).

Dominique Vargas (’21 Ph.D.) from the Department of English is the recipient of the Shaheen Award in the Humanities. A ground-breaking literary scholar of race and ethnicity, Vargas has been singled out for her original and creative work on the role that nonlinguistic and sensate forms play in mediating indigenous, Latinx, and multiethnic writing in the hemispheric Americas. Vargas is the author of several publications, with placements in leading journals, and a dissertation that is being turned into a book. She has also received exceptional marks for her pedagogical innovation and passion as an instructor of record. Vargas will start the next chapter of her career as assistant professor of English at California Lutheran University, beginning fall 2022.

Jeffrey DuBose, Ph.D. Candidate from the Department of Chemistry and Biochemistry is the recipient of the Shaheen Award in Science. A prolific and award-winning scholar, DuBose conducts cutting-edge research on a new class of semiconductors known as metal halide perovskites, exploring the fundamental processes by which they convert light into electrical energy (photovoltaics) and chemical energy (photocatalysis). His work demonstrates the potential for perovskites to be harnessed as renewable energy sources if surface interactions can be optimized. DuBose will continue his research in renewable energy technologies as a postdoctoral research associate at the California Institute of Technology (Caltech).

Tyler Giles (’21 Ph.D.) from the Department of Economics is the recipient of the Shaheen Award in the Social Sciences. Giles is an applied microeconomist who has focused his innovative and pioneering research on the intersections of economic policy, crime, and risky behaviors. Using a rich, self-constructed dataset linking individuals across criminal justice records and to financial health information, Giles’s research documents the significant and sometimes unintended consequences of understudied criminal justice policies, especially for individuals from marginalized groups. In fall 2022 Giles will take up an appointment as assistant professor of economics at Wellesley College in Massachusetts.

Abigail Jorgensen, Ph.D. Candidate from the Department of Sociology is the winner of the Social Justice Award, given annually to a graduate student in the Notre Dame community who has tackled complex societal issues through his or her scholarship, teaching, and service. Pursuing “justice for the marginalized,” Jorgensen has dedicated much of her life — both as a scholar and as a community member — to supporting and giving voice to a segment of society whom she considers to be too often overlooked or ignored: mothers. Her research examines how transitions into or away from motherhood shape mothers’ self identity and political behavior in ways that aren’t always evident or captured in current sociological representations. Not content to concentrate only on theoretical ideas, Jorgensen has been equally focused on living out her values in the South Bend community she calls home. Serving as both a birth and a bereavement doula, her goal is to help mothers and families work through the often-difficult transitions into and out of life. She has established multiple community support groups for new mothers, as well as for those who have lost children, and she has been a tireless champion for other graduate students at Notre Dame who — like herself — are also parents who may need additional physical and emotional support.