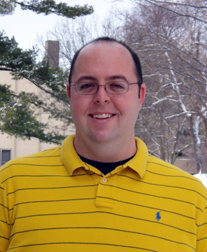 James Clancy, a Notre Dame graduate student in the Biological Sciences, was selected to attend the annual Nobel Laureate meeting in Lindau, Germany, from June 26 through July 1.

Since 1951, Nobel Laureates in chemistry, physics, and physiology/medicine have convened annually in Lindau to participate in open and informal meetings with students and young researchers.

The 2011 meeting focused on medicine and physiology. During the meeting, the Laureates lectured on topics of their choice related to medicine or physiology in the mornings and participated in less formal, small group discussions with the students in the afternoons and some evenings.

Clancy, who is a member of Prof. Crislyn D’Souza-Schorey’s laboratory, is a recipient of the Lilly Presidential and GLOBES fellowships at Notre Dame. He also holds an Indiana Clinical Translational Sciences Institute predoctoral fellowship.

Before his departure to Lindau, he said: “While earning my bachelor’s degree in bioengineering at the University of California, San Diego, I realized that the future of science was moving towards endeavors that fluidly cross disciplines. During the past three years at Notre Dame, I have relished the opportunity to work with an extremely talented group of cell biologists in the D’Souza-Schorey lab and physicians at Michiana Hematology Oncology on exciting research projects that seek real-world applications for novel science, including an investigation of tumor-shed microvesicles as a potential cancer diagnostic. I am excited to attend the Lindau meeting because it offers both formal lectures of the highest impact and personal interaction with some of the best minds of the present time. It is rare for a group of prodigious researchers with varied backgrounds to come together and discuss science in formal and informal settings. Even more rare is for graduate students to have the opportunity to participate in those meetings.”

Clancy was chosen in a highly competitive process sponsored by the U.S. Department of Energy Office of Science, the National Institutes of Health, and Oak Ridge Associated Universities (ORAU). The U.S. delegation consists of 81 doctoral students whose current research at their universities is funded by one of the sponsoring agencies or who attend an ORAU member institution. These students will travel to Lindau to participate in discussions with the Nobel Laureates, as well as with other graduate students and junior researchers from around the world. Participants meet in Washington, D.C., for an orientation meeting and travel as a group to Germany.

A full list of students and their institutions is available at the Lindau graduate student site.