Over spring break, the 11 members of the Notre Dame graduate seminar on the transmission of the classical text traveled to Milan, Italy, inspecting and reading manuscripts from the fifth century through the 15th century A.D.

The Ambrosian Library in Milan hosted the students and Prof. Martin Bloomer for a week-long session of research and instruction. Through the generosity and expertise of their hosts, the class saw some of the great treasures of the library (including the Ambrosian fifth-century bible and the poet Petrarch’s copy of Virgil’s works) and the magnificent rooms and collections of the Ambrosian gallery (including Leonardo d Vinci’s notebooks). Excursions to the early Christian churches of Milan (dating from the time of St. Ambrose) and to the resting place of Augustine and Boethius in nearby Pavia rounded out a very full week.

“We owe the doctors of the Ambrosiana an extraordinary debt of thanks for all their kindness,” said Prof. Bloomer, who has taken two previous seminars to major European libraries. 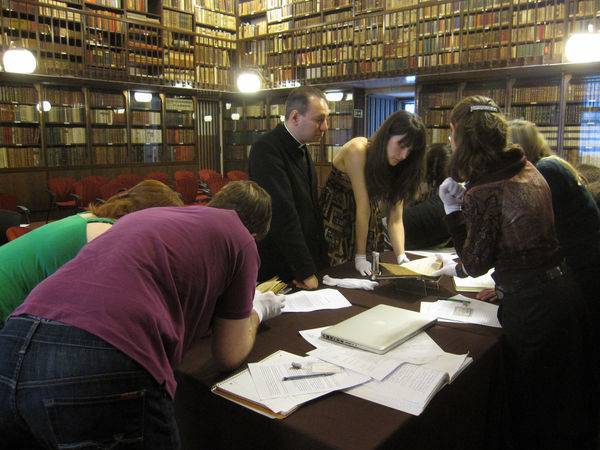 In this semester’s class, graduate students from the department of classics, the Medieval Institute, and the Program in Literature first went to the Newberry Library in Chicago, where they were joined by students from Loyola University and the University of Wisconsin. The Chicago sessions provided hands-on training in the consultation and interpretation of medieval manuscripts and early printed books, especially the schoolbooks and commentaries that sought to communicate the texts, values, and ideas of the ancient world. The Newberry Library’s strong holdings and distinguished curators refined the students’ abilities to work with archival materials.

In Milan, the Notre Dame group also visited the Biblioteca Trivulziana for a working session on renaissance Greek and Italian manuscripts and met with faculty and graduate students from the State University and the Catholic University of Sacro Cuore. Prof. Bloomer explained, “Working with primary evidence, documents from the hands of medieval and renaissance students and scholars, is vitally important for our graduate students. I wanted to remove the hurdles that make such study difficult and to introduce the students to distinguished colleagues who are working on similar materials and related historical and literary issues.”

Notre Dame’s connection to the Ambrosian Library is singular and particularly strong. Just over 50 years ago, Rev. Theodore Hesburgh, the president of the University, invited His Eminence Giovanni Battista Montini, then the cardinal-archbishop of Milan (and later Pope Paul VI), to visit the campus of the University of Notre Dame. As Father Ted tells it, the cardinal looked at a gaping hole on the east side of the university and asked what this was to be. The answer, a new library, would enrich the lives of students and faculty for generations. Thanks to the friendship of the president and the cardinal, one treasure of Notre Dame’s Hesburgh Library would be photographic copies of many of the Ambrosian Library’s manuscripts. This semester’s graduate students continue to use the photographic facsimilies and the originals and continue to benefit from and contribute to the friendship and scholarship of the university and the library. Support for the trip and for ongoing scholarly collaboration between Milan and Notre Dame comes from the Italian Studies initiative, directed by Professors Joseph Buttigieg and Ted Cachey.