Notre Dame faculty members and graduate students are making huge strides in research that focuses on the ability of adult stem cells to regenerate tissues. These stem cells, which are found in many adult tissues, have shown promise in therapies that regenerate organs as well as those that aim to cure diseases ranging from diabetes to Parkinson’s.

Bioengineering doctoral student Holly Weiss is one student who is immersed in that effort. Guided by her adviser, Prof. Diane Wagner of the Department of Aerospace and Mechanical Engineering, Holly is focusing on the therapeutic uses of tissue engineering to construct human bone. 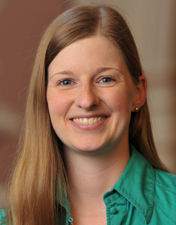 A native of Morrison, Colorado, Holly received her undergraduate degree from Notre Dame in aerospace engineering. While her undergraduate work dealt with super-high-speed wind tunnels, she gradually became aware during those formative years of the many challenges the interdisciplinary field of bioengineering presents to engineers and scientists. More importantly, she was intrigued by the possibilities bioengineering offers in efforts to prevent, diagnose, and treat an array of diseases and afflictions.

“Tissue engineering,” Holly explains, “is a discipline that combines skills and techniques from engineering and the life sciences. In our lab, we use adult stem cells to explore novel methods for repairing damaged or diseased bone and cartilage. My work focuses on stimulating stem cells from human fat tissue—specifically, the cells from liposuction waste that would otherwise be discarded—to become bone-forming cells. By placing the cells on a three-dimensional matrix that mimics the native components of bone and supplying them with the correct combination of growth factors, we can initiate the conversion from adult stem cell to bone-forming cell in the lab. My current research investigates the response these treated cells elicit when placed into the body—or, now, in my own research, placed into immune-deficient mice.”

That work, like that of many Notre Dame researchers, is part of the University’s Initiative on Adult Stem Cell Research and Ethics. Through the initiative, engineers, biologists, ethicists, and philosophers are working together to explore the interface of science and ethics.

Support such as this will allow Notre Dame researchers to further investigate the nature of adult stem cells and their potential therapeutic applications. Because a relatively small number of these cells can be expanded easily in the laboratory until enough are available for treatment, and because the cells can be induced to form multiple types of tissues, they are an attractive choice in regenerative medicine. Moreover, adult stem cells are relatively easy to harvest, tend not to form tumors, and recipients who receive their own stem cells tend not to reject them.

As Holly explains, “What we like most about the fat-derived stem cells is that we can obtain them from a simple liposuction procedure. Even better, most people have spare adipose tissue, so fat cells are more plentiful that other adult stem cells—for example, those taken from bone marrow.”

Holly’s work in Dr. Wagner’s laboratory has been boosted by skills learned during her year as a fourth-year doctoral student as a Whitaker Fellow. With the prestigious Whitaker Fellowship, she traveled to the Katholieke Universiteit Leuven in Leuven, Belgium and, working with faculty members in its tissue engineering division, developed a model for bone formation using mouse cells and immune-deficient mice.

A journal article based on that work, with Holly as first author, was published in the July issue of Tissue Engineering Part A. A slide from Holly’s article was featured on the journal’s cover.

Holly will soon complete her studies and research at Notre Dame, but she plans to continue work in bioengineering in a capacity that will allow her to function as “a bridge” between research and development on the one hand, and clinical settings on the other.

“If researchers develop something that a surgeon can’t use,” she explains, “that work is useless. We need better communication between these two vital links to deliver top-tier medical care to the many so in need.”