When César Hidalgo arrived at Notre Dame in 2004 as a Kellogg Institute for International Studies PhD fellow, he hardly fit the profile of a typical Kellogg graduate student. Rather than a social scientist studying Latin America, he was a Chilean student studying physics — one who concentrated on the hot-topic area of network theory.

But Hidalgo has come full circle. Now the ABC Career Development Professor of Media Arts and Sciences at the MIT Media Lab, this physicist focuses some of his most exciting work squarely on the important Kellogg theme of human development.

While Hidalgo has studied the dynamics of mobile phone networks, human mobility patterns, genetic co-expression, and disease co-morbidity, these days, his primary work is using sophisticated mapping techniques to help address problems associated with economic development around the world. 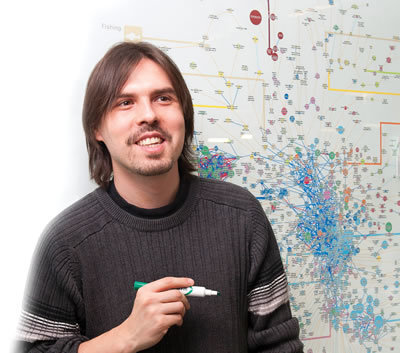 Cesar Hidalgo is using his work in network theory to plot out a course for developing nations to develop industrial and economic policy.

Along with economist Ricardo Hausmann of Harvard University’s Center for International Development, where Hidalgo is a faculty associate, he is pioneering the use of network theory to quantify the productive structure of countries — and, by extension, to point the way for countries to develop industrial and economic policies that can raise their citizens’ living standards.

The first step in their endeavor was mapping the mix of products — “from bananas to computer chips” — that 128 countries around the world make or grow and export. Some of the resulting maps were initially published in “The Product Space” (Science 317, 2007), with more extensive mapping and explanation in The Atlas of Economic Complexity (2011, available at atlas.media.mit.edu).

“The unique mix of any country’s products,” he says, “depends on a variety of constraints that are hard to quantify and measure, yet the mix can be expressed and mapped as a network — one that actually reveals not only the wealth of a particular economy but also its structure, sophistication, and capabilities.”

Now, Hidalgo, Hausmann, and others are using the maps for long-term predictions of economic development.

They have observed that countries can expand their product capabilities most easily by incrementally enlarging the set of activities they are already able to do. Thus, a country that currently exports bananas, for example, can increase its productivity most quickly by also exporting mangos — rather than deciding to begin manufacturing computer chips.

“Our method provides a little bit more pragmatism in a field that actually tends to be very full of what some development economists call wishful thinking,” says Hidalgo.

Countries are always competing to attract foreign direct investment, but it is hard for them to know what the next steps should be, he points out.

“There is a hunger for information,” he says. “It is critical for a country’s leaders to have good arguments and to be able to attract the right investors to the industries that will succeed.”

And that is where the maps come in. They can predict the success of a specific industry in a certain region or country—such as a benzene plant opening in Vietnam.

“I like to think of our work as a weather map for economic systems,” Hidalgo says. “We do not pretend to tell potential explorers where to go but to pinpoint what is out there and what routes may be shorter or more secure, thus speeding up the process of economic development.”

“One of the things I admire about César is his willingness to integrate fields in a seamless way, which adds tremendous value to the sciences,” says Maria Escobari, executive director of Harvard’s Center for International Development. “His PhD in physics combined with his passion for international development and his aesthetic sense makes him one of the most creative minds in this space.”

She calls The Atlas of Economic Complexity “more predictive of growth than any other development indicator out there.”

Hidalgo’s and Hausmann’s groundbreaking work has led to consultations with the World Bank and the Inter-American Development Bank and the governments of the Dominican Republic, South Africa, and the Brazilian state of Minas Gerais.

Their theories have caught the attention of the BBC, PBS, and the New York Times Magazine, which featured Hidalgo’s work last year in "The Art of Economic Complexity” (May 11, 2011). He was recently awarded the Bicentennial Medal by the Chilean Congress and appeared on Wired UK’s “The Smart List 2012: 50 People Who Will Change the World.”

Hidalgo credits his Kellogg funding with providing him the tools to begin this important work.

“The supplemental funds provided by the Kellogg fellowship during my graduate-school years were critical. The extra funding enabled me to go to Boston to work with my mentor, Albert-Lázló Barabási, and develop the methodology and collaborations that are the foundation of my current academic focus.”

Hidalgo’s creativity finds expression in the artistic as well as the scientific realm. His website (http://www.chidalgo.com) is certainly one of the most striking and informative websites in academia.

And his “visualizations”—beautiful graphics built from data collected from his forays into the networks of medical records, mobile phone communications, gene expression, and countries’ exports—have been published and exhibited in such venues as MIT and the New York Hall of Science.