While a younger Lionel was an avid LEGO builder, even participating in a competition at the Chicago Field Museum that involved Batman figures and the Sears Tower, he traveled to Germany as an assistant coach. 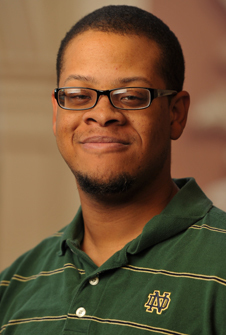 And he is very proud of his team. The group of ten local South Bend middle and high schoolers based at the Notre Dame-funded Robinson Community Learning Center made a strong showing at the international tournament. The teens earned the right to compete internationally when they won the Indiana state championship last December—winning the top spot over 51 other teams. G. David Moss, the team’s coach, is assistant vice president of student affairs at Notre Dame.

As a doctoral student in the University’s Department of Aerospace and Mechanical Engineering, Lionel is an active researcher in Prof. Scott Morris’ turbo machinery laboratory. His specific research focus is cooling flows and secondary flow in turbo machinery.

“I want to help kids as I was helped by others," he says, "—by my father, by Dr. Willie Rockward at Morehouse College, by Dr. Alec Gallamore at the University of Michigan, and by Dr. Leo McWilliams, Dr. Moss, and Dr. Brian Blake here at Notre Dame.”

As coaches, Lionel and Dr. Moss guide team members but make it clear that the work is very much the teenagers’ own. This year’s challenge at both the state and international level was food safety—with each team asked to research the various ways food can become contaminated, decide which type of contamination to address, and then come up with an innovative solution to address that contamination.

The RCLC team decided to tackle the issue of damage to fish in transport, with their innovative solution a gel that helps protect the fish during that critical time. Less damage to the fish means less bacteria growth—thus, a longer shelf life for the fish and less waste. So successful was the team’s solution, Dr. Moss is helping its members pursue a patent for it.

While Lionel was certainly gratified by the team’s success in Germany, he sees a long-term benefit of the trip as the broadening of perspectives that it inevitably sparked.

“As a 14-year-old, a trip I took to France that opened my eyes to the world," he says. "I want the same for these kids. They visited Munich, several castles, the Mercedes Benz Museum, and the concentration camps at Dachau. Plus, they met peers from all over the world. It was an experience that will forever change their lives.”