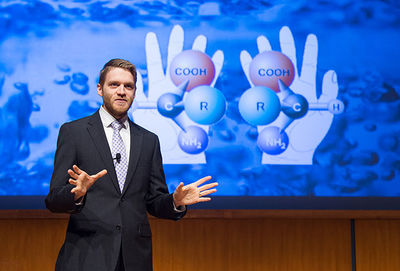 The Shaheen 3MT® is a communication competition where graduate students from the Colleges of Engineering, Science and Arts & Letters try to effectively explain their research in a language appropriate to an audience of specialists and non-specialists alike, in three minutes or less. Competitors addressed a panel of judges in front of a live audience using a single static slide to support their presentation.

Summe, whose faculty adviser is Professor William A. Phillip, was the fifth of eight competitors to present and said, “I love the 3MT competition, which is what led me to compete in it every year for these last three years. I think that public speaking is an incredibly important skill and that every student should jump at these opportunities to develop confidence in speaking to others, and the only way to do this is to practice.” Summe was initially stunned to hear his name, but also, as he put it, “incredibly excited and deeply humbled that out of the many incredible speeches, the judges picked mine. I was then filled with incredible gratitude towards my family, friends, advisor, and lab mates who have given me guidance and support, but most importantly, I must remember that all the glory goes to God.” 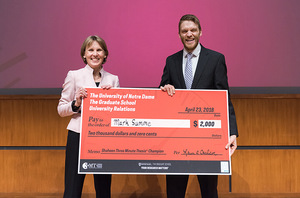 A well-crafted 3MT® presentation may contain some of the same elements as a stirring dramatic monologue with equal parts emotional and intellectual intensity. A great one may even include touches of comedy. As in its theatrical counterpart, a 3MT® presentation should command rapt attention from an audience. Along with the conviction and poise of its presenter, it will also succeed in setting a scene and revealing its passions. 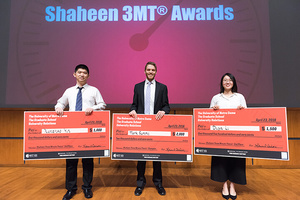 Summe’s presentation, titled “Drinking Water From A Printer?,” told the troubling story of the world’s current water supply, where less than one percent of one percent is safe to drink and even much of that is contaminated with parasites, lead, and pharmaceutical waste. Summe designs membranes that essentially act like magnets in extracting salt and heavy metals from water. Amazingly, these membranes can be generated by your average inkjet printer by substituting more functional polymers for inks and alternate porous supports for paper. 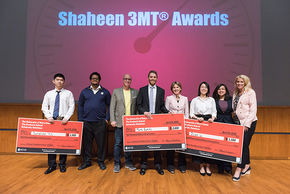 As the evening came to a close with a lively reception immediately following the competition, Summe said, “When I first heard of the 3MT competition many years ago, I had hoped it would come to Notre Dame because I think it is such a wonderful opportunity, one which every student should participate in at some time.” Summe added, “I wish everyone who will be competing the best of luck, and I look forward to seeing how well next year’s graduate students do.”