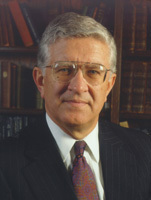 Don Michael Randel, president of the Andrew W. Mellon Foundation, will be the principal speaker May 16 (Saturday) at the Commencement ceremony for the University of Notre Dame Graduate School. He will receive an honorary degree the next day at Notre Dame’s 164th Commencement exercises.

The Graduate School ceremony will take place at 10 a.m. at the Joyce Center. An outdoor reception for graduates and their guests will immediately follow the ceremony in the area adjacent to the DeBartolo Performing Arts Center.

Randel taught for 32 years at Cornell University, serving as dean of the university’s college of arts and letters and for five years as its provost before becoming president of the University of Chicago in 2000. At Chicago, he led a $2 billion fund-raising campaign, the largest in the university’s history.

Randel earned undergraduate, master’s and doctoral degrees in music from Princeton University. He has been an Honorary Woodrow Wilson fellow, a Danforth Graduate fellow and a Fulbright award winner.