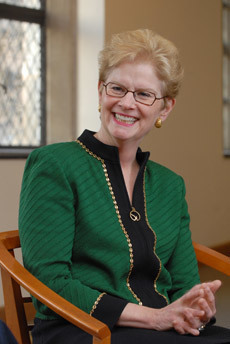 Jane McAuliffe, a scholar of the Qur’an and early Islamic history, and director of the John W. Kluge Center at the Library of Congress, will deliver the Commencement Address on Saturday, May 16, at the Commencement ceremony for the University of Notre Dame Graduate School.

The Graduate School ceremony will take place at 10 a.m. at the Compton Family Ice Arena and will honor the University’s new doctoral and master’s degree recipients.

Dr. McAuliffe is the immediate past president of Bryn Mawr College and a world-renowned scholar of Islam, the Qur’an, and Muslim-Christian relations. She was named director of the Kluge Center and head of the Library’s Office of Scholarly Programs in October 2014. Immediately prior to her appointment, she was in residence at the Kluge Center as a distinguished visiting scholar. During that time she completed The Qur’an: A Norton Critical Edition, which combines a revised and annotated translation of the Qur’an with a detailed introduction to Muslim and Western scholarship on this important work of world literature.

During her tenure as president of Bryn Mawr, from 2008 to 2013, Dr. McAuliffe led the creation of a 10-year, college-wide strategic plan; inaugurated a major in international studies and a minor in environmental studies; built a global presence for the school through student recruitment as well as university partnerships in Europe, the Middle East and Asia; and partnered with the U.S. Department of State to develop the Women in Public Service Program. During her presidency, the college launched several innovative curricular programs and saw applications rise to a record high.

Dr. McAuliffe holds a Ph.D. in Islamic studies and a master’s degree in religious studies from the University of Toronto; she also holds a bachelor’s degree in classics and philosophy from Trinity College in Washington, D.C.

She is the author or editor of six books, including the Norton Anthology of World Religions: Islam, and the six-volume Encyclopedia of the Qur’an, the first major reference work on the Qur’an in Western languages. She has written more than 80 articles, book chapters and reviews, and has lectured and spoken extensively in the United States and around the world.

Dr. McAuliffe is an elected member of the American Philosophical Society and the Council on Foreign Relations. She has served on the World Economic Forum’s GAC on Women’s Empowerment; has been president of the American Academy of Religion and has been a leader of Muslim-Christian dialogue initiatives for decades. Dr. McAuliffe has been awarded fellowships by the Guggenheim Foundation, the Rockefeller Foundation, the Mellon Foundation and the National Endowment for the Humanities. She also holds honorary doctorates from the University of Toronto, Victoria University, St. Catherine University and Simpson College.