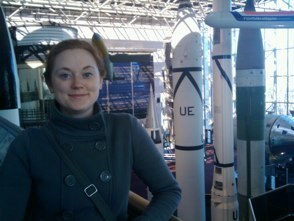 When most Twentysomethings pack their bags for Rio de Janeiro, the city’s famed beaches are their destination.

Yet Notre Dame Physics graduate student Katherine Rueff, traveling to the city this week, has a much different agenda. She has been selected as one of 11 United States students to participate in the first Brazil-U.S. Physics Student Visitation Program funded by the American Physical Society. Rueff will attend and help organize a conference titled “Exploring the Nature of the Evolving Universe,” to be held at the Pontificia Universidade Católica (PUC).

Under the direction of her adviser, Prof. J. Christopher Howk, Rueff studies the interstellar medium and star formation in the thick disks of spiral galaxies.

“Star formation in these disks,” she explains, “is a new phenomenon that provides insights not only into the processes that drive star formation, but also allows us to estimate the amount of material that is outflowing and infalling onto galaxies as they evolve. These H II regions provide us one of the only ways to directly measure the metal abundances beyond galaxies’ galactic plane.”

Much of Rueff’s work is based on data collected from the Hubble Space Telescope. Other data are derived from observations taken with the Large Binocular Telescope (LBT) Observatory, of which Notre Dame is a contributing partner, in Tucson, Arizona. The LBT is the largest telescope in the world, and Rueff will ultimately use it for obtaining most of the data for her Ph.D. thesis.

Rueff’s work makes her a perfect choice for participation in the conference. Its organizers planned it around such questions as: When did the first stars and first galaxies form? What are the main open issues in stellar evolution? What are the fossil records of galactic archeology? When and how did the Milky Way form?

Rueff received an award from the American Physical Society to attend five days of pre-conference activity. She will visit the physics department at the Pontificia Universidade Católica —to establish collaborations, participate in networking opportunities, and help with the final planning of The Evolving Universe workshop. In addition, she will present a colloquium to the physics department at PUC on August 11 in collaboration with Rafael Eurfrasion, a graduate student from the Catholic University of America.

At the conference itself, Rueff will present on her work involving the thick disks of spiral galaxies.
Prof. Howk has been invited to give a review talk at the workshop as well. His research involves the evolution of the interstellar gas in galaxies, from our own Milky Way to cosmologically distant galaxies.

Rueff has worked this summer as the lead graduate student and coordinator for the annual Notre Dame Astro Institute, which provides local K-12 teachers a week-long seminar in astronomy education. Since 2009, she has served as one of the astronomy presenters, via the Notre Dame Extended Research Community (NDeRC), in the Digital Visualization Theatre in the Jordan Hall of Science, where she has presented dozens of astronomy shows to hundreds of students and educators. Her blog is at http://erc.nd.edu/blogs/krueff/.