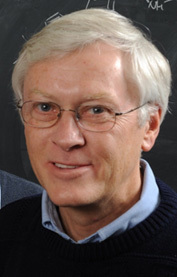 Prof. Marvin Miller of the University of Notre Dame’s Department of Chemistry and Biochemistry has been named winner of the James A. Burns C.S.C. Award, which is given annually to a faculty member for distinction in graduate teaching or other exemplary contribution to graduate education.

Prof. Miller has directly mentored more than 75 past and current graduate students and more than 59 postdoctoral fellows. He has also served on over 100 additional theses and defense committees. He has a remarkable record of placement—even in difficult times. His students are top scientist researchers at many universities and corporations—just the short list would include Abbot Laboratories, Bristol-Meyers Squibb, Monsanto, Eli Lilly, Johnson & Johnson, OSI Pharmaceuticals, Inc., and Procter & Gamble.

This success, says Prof. Kenneth Henderson, chair of the Department of Chemistry and Biochemistry, can be attributed to Prof. Miller’s emphasis on quality within his research programs and his rigor in training his students to be excellent communicators.

While winning both graduate and undergraduate teaching awards, Prof. Miller has maintained one of the most visible, highest regarded, and best funded research programs in Notre Dame’s history. He has held nearly 70 years of NIH grant funding and has been continuously funded by industrial groups since 1979. These efforts provide a critical mass for research and interactive learning.

Prof. Miller’s specific research field is synthetic organic chemistry and associated biomedical areas of investigation. The current focus of his laboratory’s work is the global tuberculosis (TB) epidemic, from which nearly 2 million people die worldwide annually. Laboratory members are working to identify cost effective anti-TB agents. In the spring of 2010, Prof. Miller received a $1.9 million grant from the National Institutes of Health to further this research.

While typically maintaining a group of 20 to 25 students and postdoctoral fellows, Prof. Miller has built up a prolific scientific publication record encompassing over 260 journal articles and other publications, along with students as frequent co-authors. He is the owner of 20 patents and has been invited to give more than 190 lectures and 140 presentations at regional, national, and international meetings.