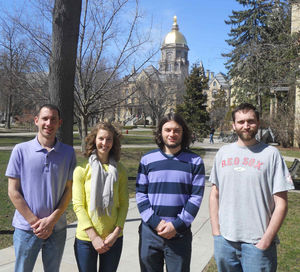 This past summer, four University of Notre Dame graduate students in the Department of Chemistry and Biochemistry attended the prestigious Lindau Nobel Laureate meetings. In its 63rd year, the Lindau meetings bring together Nobel Laureates with young researchers to “educate, inspire, and connect.”

The students were chosen through a highly competitive selection process, with over 20,000 student applicants from around the world vying to attend the meetings. While Notre Dame has sent graduate students to Lindau the past two years (James Clancy, Biology, in 2011, and Catherine Rastovski, Physics, in 2012), 2013 was a banner year with four students selected to participate. Only one other university, Johns Hopkins, sent as many delegates.

Two of the participants, Erin Wilson and Brandon Haines, offered their reflections on the trip:

“Overall, the Lindau experience was exceptional! With the meeting centrally located in Europe, it conveniently brought together many cultures and perspectives on the future of chemistry and science.

“I had the opportunity to hear approximately 40 lectures from Nobel Prize winners in just one week. The conference was intense, in terms of the amount of lectures, post-lecture discussions and dinners with individual prize winners, discussions with peers … all of these things not only made me critically evaluate the future of science and chemistry, but also how the projects I’m currently involved with are progressing science. Being a part of such a large group setting can make one really put his or her own chemistry into context.

“Also, the theme of the conference was energy, a hot topic in today’s society. There were some great interactive panels that discussed energy issues — including such distinguished scientists and political figures as former Secretary of Energy Steven Chu, with whom the U.S. delegation had the honor of having dinner with and, dare I say, ‘hang out’ with, and Howard-Yana Shapiro, an agricultural officer at Mars, Inc. This panel, along with a small group discussion with Werner Arber, the President of the Pontifical Academy of Sciences who won the Nobel prize for the discovery of restriction endonucleases, changed the way I thought about Genetically Modified Organisms (GMO’s) by hearing the real science behind the issue.”

“The Lindau meeting was an awesome opportunity. Every day, different laureates held lectures and individual Q&A sessions where the attendees could ask questions about science, career, or life. The American delegation also had lunches and dinners with various Nobel laureates, including former Secretary of Energy Steven Chu.

“Meeting the other students and postdocs probably had the largest impact on me. There were approximately 70 students in the American delegation from all over the country, and more than 80 countries represented from around the world. I hope to keep personal and professional relationships with some of the people I met on the trip.

“Overall, I took away so much from the conference, including confidence, enthusiasm, new perspectives on scientific research, career advice, and new friends. Also, it was a lot of fun! Lindau is a really great little town and traveling there was definitely also a highlight of the trip.”

Selection for this year’s Lindau participants is currently underway. The theme of the June 2014 Lindau meetings is physiology or medicine, with August 2014 meetings dedicated to economics.