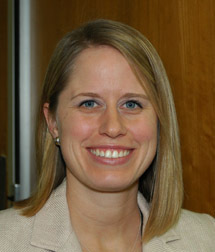 Jody Nicholson is known around South Bend as “the lead lady.”

Nicholson, a graduate student in developmental psychology, is completing her dissertation on a project called “Get the Lead Out,” a University of Notre Dame Center for Children and Families community-based research project that aims to test the effectiveness of various interventions on 84 local families whose young children have subclinical lead exposure.

“Get the Lead Out,” funded by 2006 and 2008 Rodney F. Ganey Collaborative Community-Based Research Mini-Grants through Notre Dame’s Center for Social Concerns, offers a prime example of how the Center for Children and Families research benefits both the scientific community and the community at large says director Julia Braungart-Rieker.

Nicholson’s research targeted families whose young children have low levels of lead exposure. Low levels of exposure are not reportable, Nicholson notes, and the children, who are not at high risk, are not eligible for government intervention programs. Still, even low levels of lead are associated with developmental difficulties in children.

Nicholson needed to recruit candidates for the study, and children entering Head Start needed to have their lead levels tested—a requirement for starting the program. “I was able to organize lead testing through the health department and WIC.” In addition, WIC shared prenatal growth data on the children for Nicholson’s research.

The project compared three intervention strategies. A control group of families was given a brochure from the Environmental Protection Agency. “We just give them knowledge about lead,” Nicholson says. The second group received cleaning kits—including vacuums—and instructions on how to clean around the house to reduce the level of lead dust in the child’s environment. A third group received a professional risk assessment that determined where lead was present in the house, while the fourth received a combination of all three.

But interestingly, all the interventions proved effective. “Which seems to imply that participating in the project alone helped,” Nicholson says. Based on these results, it might seem that the most cost-effective strategy might be handing out brochures alone. “But I don’t think that would achieve the same results.”

Because low levels of lead exposure aren’t reported, through “Get the Lead Out,” parents became aware of their children’s exposure, and the potential risks.

“Just telling them the test results may be effective in getting parents to enact change,” she says. The findings may also suggest that policy might need to be changed to require that even low levels of lead exposure be reported, before children suffer lead poisoning.