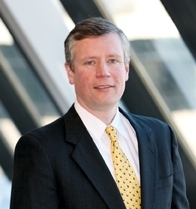 Dr. Connell is honored for his achievements in pharmaceutical research and development as well as his accomplishments as a leader at two of the world’s largest pharmaceutical companies: Bayer and Pfizer.

Advised by Prof. Paul Helquist, Dr. Connell received his Ph.D. in organic chemistry from Notre Dame in 1989—also the year in which he won the Notre Dame Outstanding Graduate Student Award. He then began a two-year National Institutes of Health postdoctoral fellowship at Harvard University under Professor E.J. Corey, who won the Nobel Prize in Chemistry in 1990.

Dr. Connell joined the new Bayer Pharmaceutical Research Center in West Haven, Connecticut in 1990 and spent nine years in Bayer’s West Haven and Wuppertal research labs, beginning as a bench chemist designing novel immunosuppressive agents. During his nine years at Bayer, Dr. Connell designed and synthesized the first small molecule inhibitor of the FKBP protein, a target believed to modulate the immune system. Also at Bayer, he applied for and obtained the first of his 38 patents and rose to the position of director of Diabetes and Obesity Chemistry.

Dr. Connell joined Pfizer in 1999 as Director of Cancer Chemistry. He was an inventor on one of the two key patents for the drug now known as Tarceva®, which is has been shown to improve overall survival in advanced non-small cell lung cancer and advanced pancreatic cancer. He then became Pfizer’s Executive Director of Research operations and, next, the Vice President of External Research Solutions Center of Excellence (ERS). In 2011, Dr. Connell moved to Shanghai for a one- year assignment to help Pfizer establish the Anti-infective Research Unit. He returned to the States in early 2012 and continues to lead ERS and manage Pfizer’s network of research partners around the globe.

The citation for Dr. Connell’s award sums up his achievements: “As his trajectories at two of the worldwide leaders in the pharmaceutical industries demonstrate, we honor Dr. Connell not only for his scientific achievements but for his impressive combination of scientific ability and business acumen. His impact on research at Pfizer includes such innovations as a set of structural alerts or structure-based warnings to caution chemists about incorporating structural fragments that may be causally linked to toxicity in a drug candidate. He established and implemented a centralized Chemistry sourcing strategy for the Pfizer campuses and later spearheaded an initiative to monetize the company’s underutilized research assets and intellectual property. At a time when the pharmaceutical industry is seeking to enhance research productivity and bring important new therapies swiftly to the market, he was an early pioneer in fostering external collaborations while balancing risk and reward.”