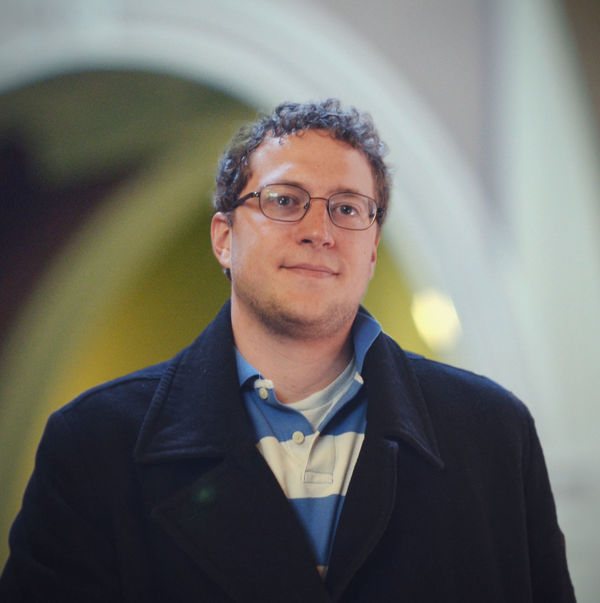 Typically, we think of playing with Legos as the introduction to building bigger things—moving, in our younger days, from the tiny plastic blocks to the more ambitious engineering feats of Erector Sets and robotics. In this trajectory, the lessons we learn from simple devices help us to create ever more complex machines. Our child-sized ambitions become practical, adult successes.

Anthony Ruth, a second-year graduate student in the department of Physics, began with an interest in Legos and similar toys—“anything where I could build stuff,” he said—but his research frontier precludes the typical advance in scale. Instead, his research interests lie in nanoscale technologies.

“Are we talking the width of human hair?” I asked, needing a benchmark to imagine the smallness of technologies on a nanoscale. Ruth did not laugh at me, but very calmly, and with characteristic understatement said, “Well, smaller than that.” Later in our conversation, Ruth alluded to computer circuits in development that are 10-15 nanometers wide. It wasn’t until after some homework that I discovered such a circuit’s width is five thousand times slimmer than a human hair. At such a conceptual impasse, the logic of our Lego-inflected imaginations really takes hold: the small can be large, but then the small can also be, well, much smaller.

Success has come early to Ruth in his graduate student career. This spring, he was selected as the recipient of a prestigious 2015 NASA Space Technology Research Fellowship, one of the most selective and most well-funded graduate student research fellowships in the United States, for his application “Hybrid van der Waals materials in next-generation electronics.” In a very real sense, his work will be used for space missions.

Advancements in nanoscale technologies have escalated, in part, by recent discoveries in an area of materials science focusing on two-dimensional materials. One such material, graphene, is made of a single-atom layer of carbon and shows such extraordinary electrical, optical, and mechanical properties that researchers of its production and characteristics earned the 2010 Nobel Prize in physics. The materials science community—of which Ruth is a member—has begun to synthesize more graphene-like, atomically thin materials out of elements and chemicals other than carbon. Ruth, using density functional theory methods and super-computer simulations, models what happens when these single-atom layers are stacked into structures called hybrid van der Waals solids. He hopes that by stacking various combinations of these layers, the hybrid van der Waals solids will provide a range of useful materials.

“Whenever NASA funds you, they’re going to justify it—it can’t be for something just cool or unique,” Ruth explained. “These two-dimensional and hybrid van der Waals materials will be very useful to NASA. It all goes back to their size. They’re small and use the minimum amount of space you need to get jobs done. They’ll be used for catalysts, for recycling oxygen in a spacecraft, and for the layers and coatings on astronauts’ helmet visors that block out UV light.” He listed other uses in electronics: in capacitors (power-storage devices like batteries); in combination devices that take in solar energy to drive some other chemical process; and, in transistors, the key components of computer circuitry. “And, yes,” he added helpfully, “these properties are maintained in devices smaller than the width of a human hair.”

Ruth’s advisor, Prof. Boldizsár Jankó, was effusive in his praise for his graduate student’s research. “I’m not surprised Anthony won this fellowship,” said Jankó. “He is a very advanced student, very prepared, very mature, and came in with a lot of experience. Despite the fact that he is only a second-year, he is very senior in our department."

“I want to emphasize that Tony’s way of doing materials science is not the way its been done for the past one hundred years,” added Jankó. "He is on the edge of very new methods, of advancements made only in the last decade.”

Mike Westrate, Associate Program Director of Grants and Fellowships, worked with Ruth throughout the NASA STRF application process, and noted the many Grants and Fellowships programming opportunities Ruth took advantage of to craft a competitive application. “He worked hard, but he also worked smart by using as much of my office’s support as he could,” said Westrate. “Because of his efforts and perseverance, Tony has been one of our stars all year—and now he is one of NASA’s stars, as well. We in the Graduate School could not possibly be happier for him.”

Ruth, who completed his BS and MS in Physics at the Illinois Institute of Technology, said his decision to attend Notre Dame was partly a matter of funding and partly of serendipity. His professors at Illinois collaborated regularly with professors at Notre Dame, and they suggested he apply here. He did so, and was accepted and began his doctoral studies in 2013.

As part of his fellowship, Ruth will spend ten weeks a year at a yet to be determined NASA facility.