Ashleen Menchaca Kelly is beginning her fourth year as a graduate student in political theory in the Department of Political Science at Notre Dame. 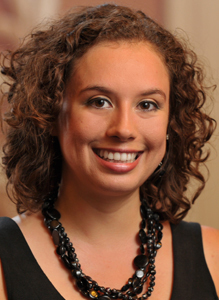 Her dissertation is on the need for individual and communal sacrifice in political communities, particularly in the theories of St. Augustine and Machiavelli. Her research interests include the civic republican tradition and the intersection between theology and political philosophy.

In addition to writing her dissertation, Ashleen is currently serving as an editorial intern for the political theory journal Review of Politics.

She has received an award for excellence from the Kaneb Center for her work as a teaching assistant.

Ashleen was a Deans’ Fellow at Notre Dame for 2008-2009 and 2009-2010 (formerly, called Diversity Fellows), and received the Laub-Novak Fellowship for research in politics, philosophy, and religion in the summer of 2011 through the Jacques Maritain Center at Notre Dame.

Ashleen says, “I am very grateful for the uniquely excellent advising and mentorship I have received from the faculty in my department.”