Brandon Cook is a graduate student in the doctoral program in Medieval Studies at the University of Notre Dame. As an art historian, Brandon studies medieval Italy and the history of cultural exchange between Byzantium and the Latin West through the objects these societies produced. His recent research has focused on the veneration of the saints at the twelfth-century Palatine Chapel in Palermo, Sicily. 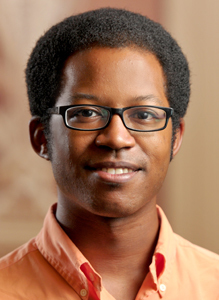 As the son of an American diplomat, Brandon spent his high school years in Pakistan and Hungary, where he first developed an interest in languages and world cultures. Continuing with these interests, he studied linguistics as an undergraduate at Yale University, and just before beginning his studies at Notre Dame, he earned a master’s degree in art history from the University of Wisconsin, Madison. In describing his path from linguistics to medieval studies, Brandon says, “It was a course on Dante in my senior year of college that sparked my passion for the Middle Ages. I was first struck by the beauty of the Vita Nova and the Divine Comedy, in particular their human and intellectual depth. After that, I couldn’t get enough of medieval culture; the following semester I took classes in medieval history and art history and began to study Italian.”

On why he chose the program in Medieval Studies at Notre Dame, he says, “It’s the perfect place for someone with interdisciplinary interests like me. While I’m encouraged to keep my ultimate intellectual and disciplinary aims clear, I am equally encouraged and given the space to take courses to develop my skills in other disciplines such as philosophy, liturgical and manuscript studies, and ancient languages.” He adds, “Beyond the world-class collection of scholarly resources available here, I’m surrounded by scholars and students who have the same passion for medieval culture that I do and who, very importantly, want to share it with others. It’s an incredibly stimulating place to develop as a young scholar, and I’m happy to be here.”

Brandon is a Notre Dame Presidential Fellow and submitted an award-winning entry to the Graduate Research Symposium in 2011.