Deacon Jim Stokes, an attorney admitted to practice law in Florida and California, was ordained a Roman Catholic deacon in August 2008. “I had the benefit of some excellent professors as I was formed for ministry at the seminaries in South Florida,” Deacon Jim says, “however, it left me hungering for more.” This, coupled with a passion for liturgy, led him to the University of Notre Dame.

Deacon Jim assists with diaconate formation in both the Diocese of Orlando and the Archdiocese of Miami, serves as the director of liturgy at his parish, and serves part-time as a master of ceremonies for certain episcopal liturgies in his diocese. 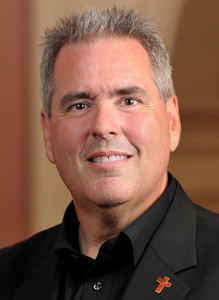 Deacon Jim explored theology programs throughout the country, looking at programs that had flexible schedules for those living far away and that could fit in to his full-time obligations of working and raising a family. “I did not want a degree program that is primarily an on-line format,” he says, “as I have always felt that the majority of learning takes place in the classroom, where a student benefits from the interaction and discussion among classmates.”

“I had no idea the wonderful diversity I would experience at Notre Dame,” says Deacon Jim. “I have had classmates from all over the United States, as well as the countries of Australia, Ireland, Canada, and Kenya, with ages ranging from 20 to 70. This has included students from the Greek Orthodox, Anglican, Episcopalian, Methodist, Presbyterian, Lutheran and Mennonite faith traditions; and clergy, religious, lay ministers, and laity.”

Deacon Jim genuinely enjoys the diverse discourse, acknowledging that he and his classmates are all working towards the same goal: learning more about God and our right relationship with God. Nevertheless, Deacon Jim appreciates that the teaching is solidly in accord with the Magisterium of the Catholic Church. “It is important to me, especially as a deacon, to know that I am learning theology that is in keeping with the teachings of the Church. I get that from the liturgy program at Notre Dame, while simultaneously learning about other faith traditions from my classmates.”

Deacon Jim is looking forward to taking what he learns at Notre Dame and using it to make himself a better servant of the people of God.