Enrique Blair, also known as Erik, is a Ph.D. student in the Department of Electrical Engineering.

Erik studies power dissipation in electronic circuits, with a special focus on the development of a quantum mechanical dissipative model for molecular Quantum-dot Cellular Automata (QCA) circuits. As he explains: “Molecular QCA circuits represent a paradigm for binary computing that could dramatically decrease the power consumption and heat output of electronic computing devices, while offering higher device density and faster device operating speeds. To the everyday consumer, this means faster and more powerful computers—ones that are also greener than those currently available. Additionally, QCA-based portable computing devices will have significantly increased battery lives and will dissipate less heat.” 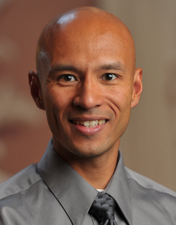 Erik’s studies in molecular QCA also involve the study of quantum decoherence, a fascinating and developing theory of fundamental importance which addresses the emergence of the classical world from the quantum mechanical substrate.

Erik’s adviser is Prof. Craig S. Lent, the Frank M. Freimann Professor of Electrical Engineering. Prof. Lent invented the concept of QCA, which, if realized, would transform both the computing industry and the nanotechnology industry.

Erik has received two U.S.-government-sponsored fellowships. He was awarded a three-year fellowship in the National Defense Science and Engineering Graduate (NDSEG) Fellowship Program of the American Society for Engineering Education (ASEE) with sponsorship from the U.S. Department of Defense (DoD) High-Performance Computing Modernization Program (HPCMP). He also is a fellow of the Graduate Research Fellowship Program (GRFP) of the National Science Foundation (NSF).

Erik is has both a bachelor’s of science degree (2002) and a master’s of science degree (2004) in electrical engineering from the University of Notre Dame. A Naval Reserve Officer Training Corp (NROTC) graduate, he served as a submarine officer in the U.S. Navy for six and a half years, with a two-and-a-half-year tour of duty as a rotational military instructor at the U.S. Naval Academy. There, Erik taught junior-level courses in the Electrical and Computer Engineering Department, was nominated for the Apgar Award for Excellence in Teaching, and found a deep passion for teaching. Motivated by this and an enjoyable history of research in QCA tracing back to his senior capstone project, Erik chose to return to Notre Dame to again be part of QCA research.

Of Notre Dame and his research experience here, Erik says, “Notre Dame has always been a very special place for me, one in which I believe very strongly. I have always appreciated Dr. Lent and his vision for QCA. QCA is not just an obscure application of some highly technical and esoteric principle; rather, it is a whole new interdisciplinary paradigm that demands to be researched on many different levels and from a diversity of perspectives.”