One of the fortunate few who have a passion and talent for both science and language, Notre Dame geological sciences doctoral candidate Jessica Morrison is quickly making her mark in the world of science journalism.

This spring, Jessica won a coveted American Association for the Advancement of Science (AAAS) fellowship and will be interning during Summer 2012 at the Chicago Tribune. (Jessica Stoller-Conrad, Biology M.S. 2012, is also one of twelve Summer 2012 AAAS fellows. She will work at National Public Radio.) 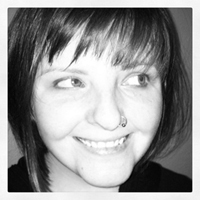 Since 2009, Jessica has been blogging at ihearttheroad.com about science as well as travel, music, and food. She contributes to the Scientific American Guest Blog and is active in the science journalism community on Facebook, Twitter, and Google+. She was even a subject of an interview herself in the Scientific American blog A Blog Around the Clock.

Of course, full time, Jessica is a graduate student focused on actinide geochemistry and working in the laboratory of her adviser, Prof. Peter Burns, a leading authority in this field, particularly as it relates to nuclear waste disposal. Jessica explains her own work this way: “I synthesize inorganic compounds featuring our radioactive friends on the bottom row of the periodic table—research that has broad implications for nuclear fuel storage and environmental remediation.”

Jessica’s path to her current status of full-time graduate student/part-time science blogger is as unconventional as her twin passions. She grew up in the small town of Lewisburg, Tennessee, in a home that included her mother and older brother, and was the first member of her family to attend college. At Middle State Tennessee University, she began as an advertising major but then switched quickly to journalism. Jessica’s life changed, though, when she signed up for an introductory geology class to meet a science course requirement.

“I loved it! And I loved my next-level mineralogy course even more,” she recalls. “This is the difficult ‘weeder’ course — there’s lots of chemistry and investigations into the atomic structure of rocks and the like. I was taking calculus and chemistry, too; yet, as a first-generation college student, graduate school wasn’t quite on my radar.”

Graduate school first became an option for Jessica when she attended a Geological Society of America conference in the fall of her junior year. There, she happened to wander by the recruiting fair and, serendipitously, stopped at the Notre Dame table staffed by Prof. Burns, now her advisor. Hearing of her interest in geology, he invited her to visit Notre Dame and, right before her senior year of college, she participated in a Research Experiences for Undergraduates (REU) program in the Burns laboratory as a McNair Scholar.

“That was a pivotal summer. Basically, I was hooked!” Jessica says.

Four years later, as part of an active research group in the critical field of energy, Jessica has much to explore and discuss with her readers. Her first article for Scientific American was about the nuclear reactor accident in Fukushima, Japan. A second Scientific American posting dealt with the work of Notre Dame civil engineering professors Tracy Kijewski-Correa and Alexandros Taflanidis in creating sustainable housing in earthquake-devastated Haiti — and was moved from the blog to the front page of ScientificAmerican.com. Other articles have explored efficiency advances in solar materials, alternative funding sources for science, and the intersection of science and politics.

Jessica says that as she was writing the Haiti piece — one that came together for her in just a few hours — she had a distinct and exhilarating feeling: “This is what I’m supposed to be doing. . . using my skills as a researcher and scientist to make science more accessible to the public.”

Fortunately for her readers, Jessica’s particular niche is achieving that accessibility through stories rather than dry reporting. Her introduction to the elements called actinides begins this way:

I bought three copies of Sam Kean’s The Disappearing Spoon: And Other True Tales of Madness, Love and the History of the World from the Periodic Table of the Elements. I left the first one in the seat-back pocket of Delta flight 188 from Beijing to Detroit. The second one is sandwiched between ROCK and GEM and The Poisoner’s Handbook on an end table in my living room. The third is a Kindle edition that I purchased so that I could quickly search the text.

With that kind of reporting, Jessica is sure to achieve her goal of “being the conduit through which scientists share their stories.”