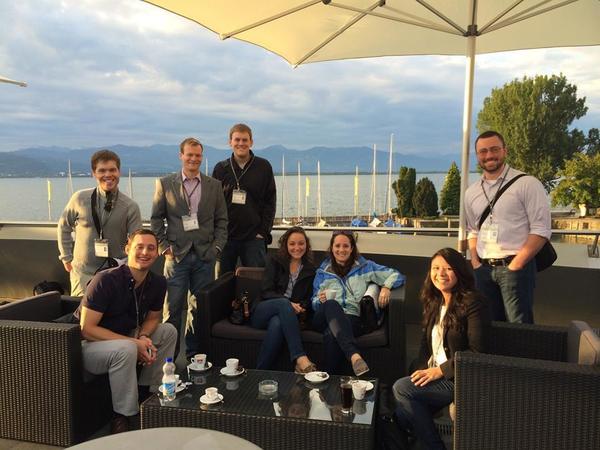 Robert Lester, far left, with other delegates in Lindau

Over the past four years, graduate students at the University of Notre Dame have been selected to participate in the prestigious Lindau Laureate Meetings —which provide a forum for Nobel Laureates to meet with graduate students and postdoctoral scholars from around the world. The guiding principle of the meetings is to “Educate. Inspire. Connect.” The laureates fulfill that promise by interacting with their younger counterparts, who also use the meetings to learn from and network with each other—and so advance knowledge worldwide in their generation.

The Lindau meetings have rotated since 1951 among various physical sciences. In 2010, parallel Lindau meetings were established in economics, and in 2013, mathematicians and computer scientists created a similar forum for renowned scholars and graduate students/postdoctoral scholars with the Heidelberg Laureate Forum.

In 2014, Notre Dame graduate students were successful in all three competitions:

The Lindau meetings in Economics, held from August 19th to 23rd, brought together 18 Nobel laureates and 460 younger economists.

The 5th Lindau Meeting on Economic Sciences in Lindau, Germany was incredible. I met some of my intellectual heroes, collaborated with colleagues, and relaxed on a beautiful island facing the Swiss Alps.

During the four intellectually stimulating days, I heard some of the best minds in the profession discuss their work. Additionally, the meeting was structured so that students had time to attend 90-minute sessions in which each Laureate spoke informally to a smaller group of students. I gained the most as a scholar from these sessions, since they functioned as a question-and-answer period. Although asking questions in front of the leaders in the field was intimidating, the answers they provided made it immensely rewarding.

I was incredibly fortunate to have the support of the economics faculty, especially my adviser, Michael Pries. Although the next Lindau meetings do not take place until 2017, I encourage first- and second-year graduate students to remember to apply.

Robert Lester is a fifth-year graduate student in the Department of Economics whose research focus is macroeconomics and labor economics.

The Heidelberg Lindau meeting in Mathematics held from August 19th to 23rd, brought together 38 Nobel laureates and 200 younger mathematicians.

Interacting with Laureates that are world references in my area was a profound and transformative experience. I have strong hopes that this meeting, though still in its second edition, will become a tradition and help develop interest for mathematics and computer science as well as increase its appreciation by society as a whole.

We mathematicians don’t always have the ‘cool factor’ that many other scientists enjoy from society and the media, but there are plenty of reasons to tell the world about the astonishing beauty of mathematics, which can — and should — be appreciated by all of us. 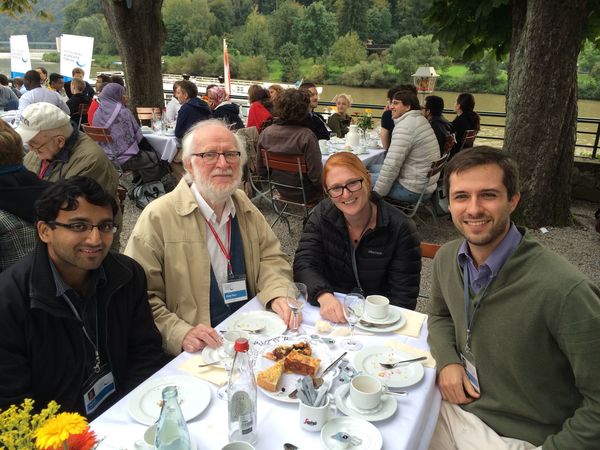 Renato Ghini Bettiol, right, enjoying afternoon
coffee at the margins of the Neckar
river in Heidelberg. Also seated is 2005
Turing award-winner Peter Naur, a Danish
computer scientist, and other young
researchers from the American delegation.

Renato Ghini Bettiol is a fifth-year graduate student in mathematics whose research focus is differential geometry—specifically, examining how curvature interacts with the global shape of an object.

Applications and nominations for Heidelberg 2015 will be accepted beginning November 17.