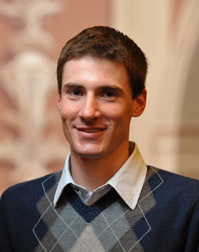 “Interdisciplinarity” is the buzz word of modern education. What does it actually mean? A careful definition would state it to be drawing on disciplinary perspectives and integrating their insights through construction of a more comprehensive perspective. 1 The research and work of Ryan Kennedy, a doctoral candidate in Computer Science and Engineering, fits this definition perfectly.

Ryan grew up in Niles, Michigan—a child who aspired to one day attend Notre Dame and who thrived at one of Michigan’s excellent public school math and science centers. As an undergraduate at Notre Dame, Ryan found his way to computer science sophomore year and also participated in a summer Research Experiences for Undergraduates (REU) program with Prof. Gregory Madey, which introduced him to the concept of agent-based modeling. That term describes computer simulations of complex physical phenomena—from molecules to societies to entire ecosystems. Basically, explains Prof. Madey, now Ryan’s dissertation advisor: “We study large numbers of diverse things and how they interact. Rather than developing a lot of equations and trying to predict what’s going to happen—which is difficult mathematically when the items to be studied are all different—we build a model of the system and let it behave as it would in real life.”

In graduate school, Ryan’s research has focused on two major areas—bioinformatics and agent-based modeling and simulation—bound together with the common thread of global health. “A major component of my dissertation work involves the discovery and annotation of transposable elements within genomes, a work co-advised by Prof. Frank Collins of the Biological Sciences Department. Transposable elements are sequences of DNA found throughout most genomes that have the ability to move about the genome, playing a major role in genome evolution. My research focuses on a pipeline for the automatic discovery of transposable elements as well as implementing a community annotation pipeline for them. This work is intended to be included at VectorBase, a bioinformatics resource center for vectors of human pathogens. The broad goal of my work is to combat the explosion of available genomic data with new automated analysis techniques.”

“The agent-based modeling and simulation aspect of my research explores pathogen spread among long-tailed macaque monkeys in Bali, Indonesia. Together with Biological Sciences professor Hope Hollocher and doctoral candidate Kelly Lane, as well as Anthropology professor Agustín Fuentes, we have developed a computer simulation model that studies the impact of landscape—for example, forests, rivers, and rice fields—on pathogen spread. On Bali, macaques have coexisted with humans for at least 2,000 years. Changing land-use patterns have resulted in increased contact between the macaques and humans. In fact, the macaques have been implicated as hosts and reservoirs in the emergence of several diseases in humans.”

In addition to his own research, Ryan has worked for two years as a recruiter for the Notre Dame Graduate School. “I get lots of questions on interdisciplinarity, and I can speak to that topic very directly and enthusiastically from my experience. I also know that I can speak to the collaborative nature of work here at Notre Dame—both collaborations between students and collaborations between faculty and students. I’ve learned a lot of biology for my work—much of it through my various collaborations. When researchers from different disciplines are working on a question, if one of us doesn’t understand something, we white-board it and work to bring everyone up to speed. I know from conversations with students elsewhere that this level of collaboration is something that is truly special about Notre Dame.”

As Ryan completes his dissertation and prepares for his defense, he is exploring career opportunities in academia and industry.