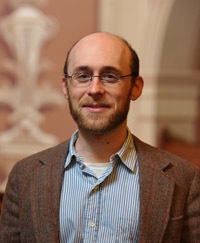 Notre Dame’s Department of Theology is among the best in the world, with a particular point of pride that its faculty have won more prestigious fellowships from the Association of Theological Schools than any other institution—18, to Harvard’s and Emory’s 16.

And, with a ranking such as this, Theology attracts the very best students in the world. One is Michael Cover, whose academic pedigree includes degrees from Harvard, Oxford, and Yale—and who is also a newly ordained Episcopal priest.

Fr. Cover’s path to Notre Dame began with an interest in language. “I have had a longstanding fascination with sacred texts and languages. As the son of an Old Testament seminary professor, my early years were spent, literally, surrounded by the Epic of Gilgamesh, Akkadian lament poetry, and lexica in various languages. My childhood home always had something of the aura of a monastic library.”

“My early acquaintance with sacred texts no doubt played a formative role in my discernment of a call to Episcopal priesthood. I discovered that it was in the liturgy first and foremost that the Word of God, though translated, finds a public voice, a place to become incarnate.”

Although Fr. Cover’s desire to study sacred languages and literature would eventually lead him to biblical studies, he began his collegiate study of “sacred” texts at Harvard College with James Joyce, whom he playfully calls “the high priest of 20th century Irish modernism.” Ultimately, however, Fr. Cover’s philological interests pulled him away from Harvard’s English Department and into its Department of Classics, where he studied Latin and Greek literature, writing his undergraduate thesis on Hesiod’s two great epics, Works and Days and the Theogony.

Fr. Cover next attended seminary at the Yale Divinity School and Berkeley Episcopal Divinity School. “In addition to giving me the opportunity to teach Greek and Latin in the Yale Classics Department, the time in New Haven introduced me to the sacred literature from the period known as Second Temple Judaism, which I came to realize was essential for understanding the New Testament. When I began to investigate doctoral programs in New Testament that would enable me to study this period, Notre Dame rose quickly to the top of my list. The Theology faculty includes such renowned scholars as Profs. Gary Anderson, Gregory Sterling, Eugene Ulrich, and James VanderKam. This combination makes Notre Dame one of the premier institutions for studying Second Temple Judaism in the world.”

At Notre Dame, Fr. Cover’s research interests include Philo of Alexandria, the Gospels, and Paul. He has learned three new sacred languages—Syriac, Coptic, and Aramaic—to add to his expertise in Latin, Greek, and Hebrew. The language, he explains, serves as the entrée to the text. “As a priest, I recognize that historical-critical study of the Bible does not take place in a vacuum. As I carry out my study of sacred texts using the historical and philological tools of my field, it is critical to me that here at Notre Dame I have constant recourse to conversation with students and professors within the various divisions of Theology who help me address questions of the relevance of my work for the church and the world. The fact that studies like mine occur within a department of theology rather than in a religious studies department was a major reason I chose to attend Notre Dame.”

Moreover, he notes: “Being at Notre Dame has facilitated my development as a priest as well as a scholar. Notre Dame’s Theology faculty includes many clergy who are models of how to combine academic and clerical vocations. They have been incredibly supportive of me as I worked through the ordination process.”

Like his mentors, once Fr. Cover completes his doctorate, he hopes to teach at a research university or seminary but continue as well with ministry. He is already combining the best of those worlds. A four-year member of the Harvard Glee Club, he offers talents in music as well as preaching and more general ministry to his own parish of St. Paul’s in Mishawaka and also helps out at various other churches in the Episcopal Diocese of Northern Indiana.